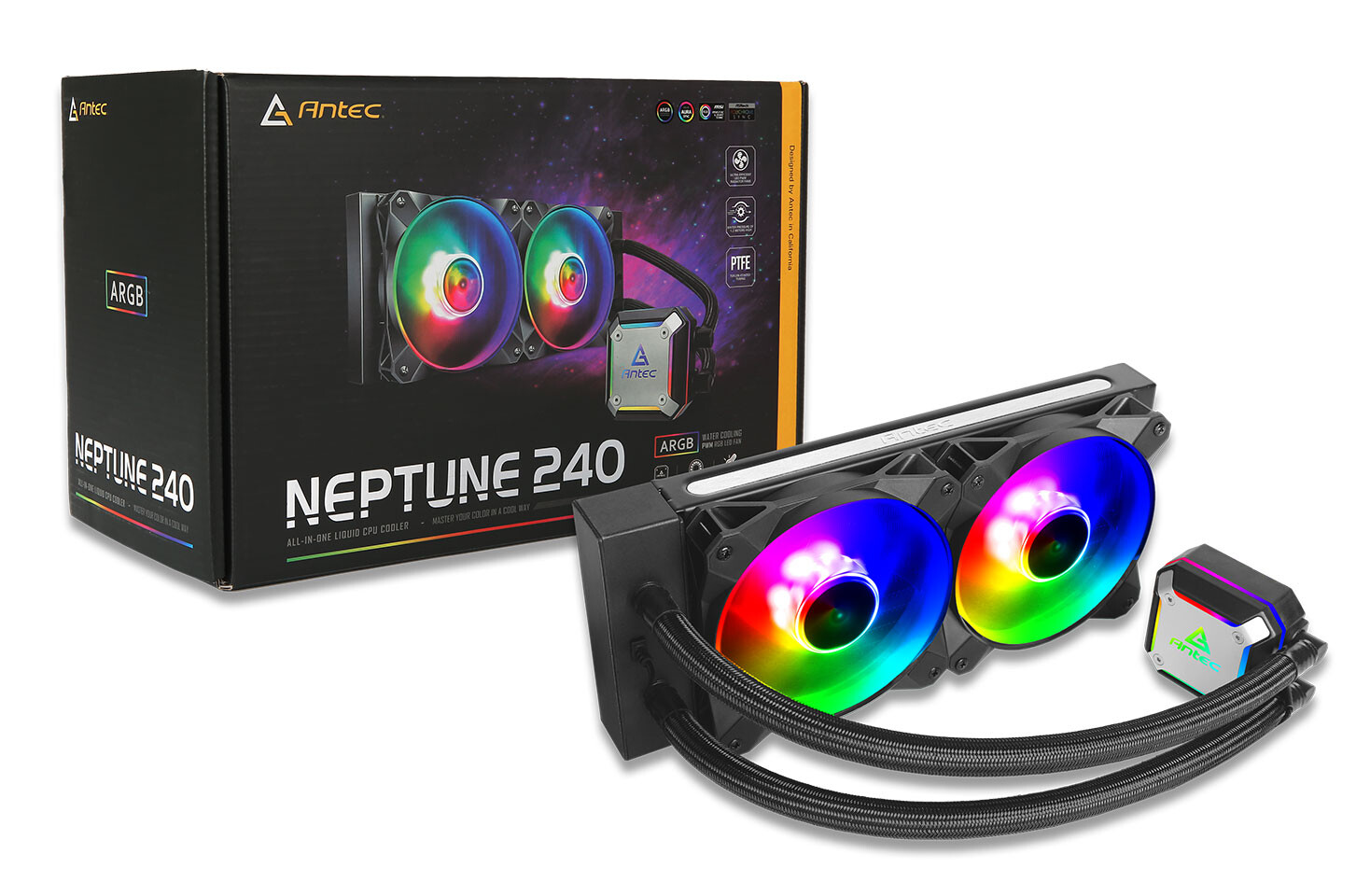 Antec is hoping to make a splash in the burgeoning all-in-one (AIO) liquid cooler market with its new Neptune range of liquid coolers. At under $80, this 240mm model is more affordable than many models we’ve seen recently, costing only $5 more than current budget focused favourite, the ARCTIC Freezer II 240.

While the ARCTIC lacks lighting, though, Antec has managed to include digital RGB lighting and a five-port PWM and lighting hub. At first, we thought the latter was just a cheap proprietary fan controller, but as it  turns out, all five fan headers are standard 4-pin connectors, and you can hook up the hub to your motherboard to control five fans at the same time.

The same goes for the lighting, where five 3-pin digital addressable RGB ports allow you to control the lights on the pump and both 120mm fans. Even more impressive is the fact that the unit can hook up to all four major motherboard manufacturers’ 3-pin RGB ports. There’s even an adapter included for use with some Gigabyte boards that differ from the norm, so you can use these boards’ software to control it.

We Haven’t got to the cooling performance yet, and we already think the Neptune 240 has a lot of problems.

Meanwhile, the contact plate is milled from 0.8mm-thick copper and has thermal paste pre-applied; while convenient, this means you’ll need to buy more should you need to replace your CPU. On top of the water block would normally sit a pump, but the Neptune 240’s pump resides in the edge of the radiator block instead, which helps to reduce cable clutter around the CPU socket. This setup does mean the radiator stretches to 287mm, but that’s only a centimetre longer than Corsair’s equivalent models.

The two 120mm fans included can spin at up to 1,600rpm, which is fairly restrained compared with many AIO liquid coolers we’ve tested, but that does mean they don’t make an unpleasant noise, even at full speed. Antec only includes screws for these fans, though, so you’ll need to purchase additional screws if you want to add more of them.

The mounting mechanism is fairly familiar to anyone who has installed an Asetek-derived liquid cooler, and it’s easy to install on all sockets. Compatibility includes Intel LGA115x, LGA1200 and LGA2066, as well as AMD’s Socket AM4 and Threadripper sockets. Mounting plates secure to the bottom of the waterblock using screws. A universal backplate deals with mainstream desktop CPU sockets, while pins are used for both LGA2066 and Threadripper sockets, although the contact plate won’t cover a whole Threadripper heatspreader. You then secure the waterblock with thumb screws.

A single SATA cable then powers the pump, which is thankfully very quiet, as there’s no way to adjust its speed. Another SATA connector is then required to power the fan and lighting hub. The hub does have its own built-in buttons to control the lighting, should you not wish to use your motherboard’s software, and it controls the speed of effects and their modes.

The RGB lighting wasn’t as vivid or accurate as that on Corsair or NZXT’s coolers, however, with the waterblock section looking a little flat, but the fans were more vibrant, with the semi-transparent blades catching the light and diffusing it. As the waterblock and fans use standard 3-pin RGB connectors, you can use your own lighting control system to deal with them too.

In our Socket AM4 with an overclocked Ryzen 7 1700, the Antec Neptune 240 managed a delta T of 57°C, matching the Corsair A500 air cooler and sitting just 1°C behind the Arctic Liquid Freezer II 240. Comparatively, Corsair’s H115i RGB Pro XT offers similar cooling at much lower noise levels, and a delta T of just 51°C even on its medium fan speed setting. However, it’s also considerably more expensive.

Set against our overclocked Core i5-9600K, the Antec cooler managed a delta T of 54°C, which was a little better than the Corsair A500 and again a match for the Liquid Freezer II 240. The Corsair H115i RGB Pro XT was again cooler on its medium and high speed settings, but it’s quiet mode proved warmer.

Finally, pitched against the monstrous Core i9-9980XE, the Neptune 240 managed a delta T of 57°C, which bettered the Corsair cooler on its medium fan speed setting, but was 7°C away from matching it on its full speed setting. It was also 8°C cooler than Corsair’s A500 air cooler and only 3°C off the pace of the EK AIO 360 D-RGB.

We’re really impressed with the Antec Neptune 240, for numerous reasons. Firstly, the price of under $80 is very reasonable for a 240mm AIO liquid cooler equipped with RGB lighting. Sure, it doesn’t have software control, which is included with the likes of the Corsair H115i RGB Pro XT, but it makes up for it with the inclusion of its fan and lighting hub, which makes easy work of cable tidying and controlling your fans and lighting. The lighting isn’t the most vivid we’ve seen, but it still looks good.

It’s the price that’s most impressive though. Despite sporting a fan hub and digital RGB lighting, the Antec costs barely any more than Arctic’s Liquid Freezer II 240 and performs essentially the same, managing to tame even our 18-core Intel CPU. It’s also easy to install and feels well-made. This is a decent cooler with loads of features and a very fair price.

Great cooling and plenty of features for a surprisingly generous price.