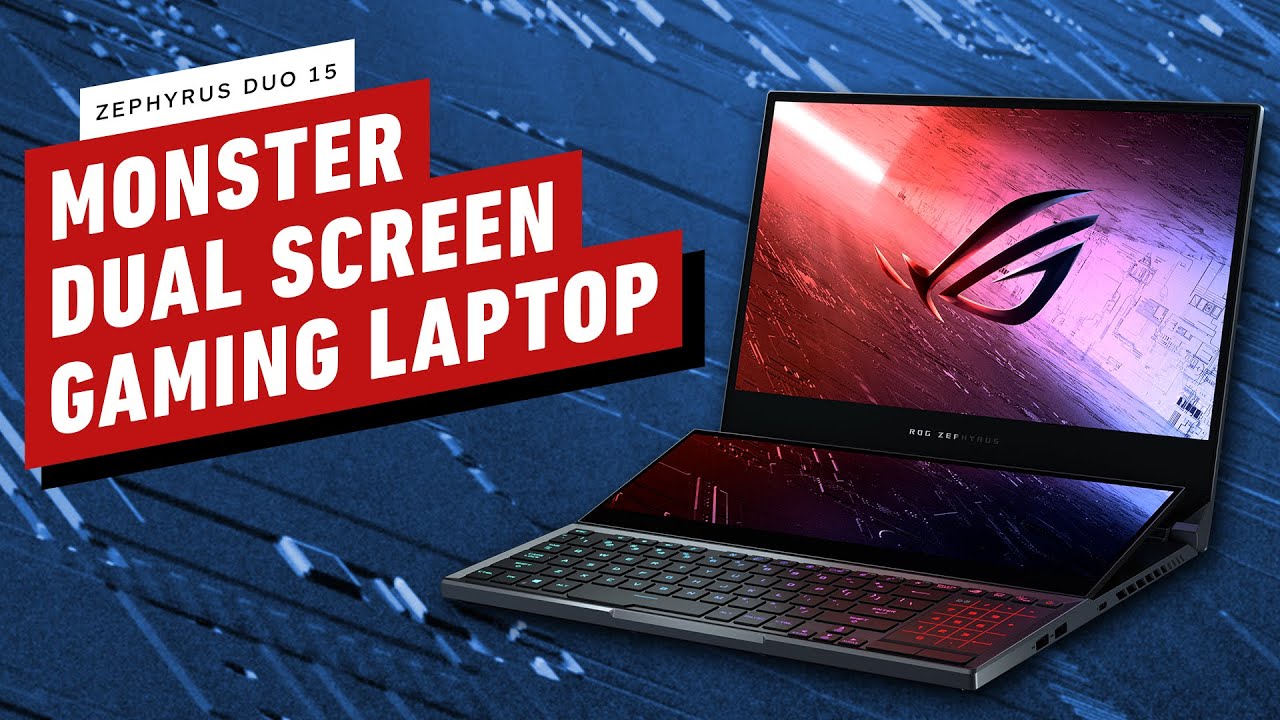 Read our thoughts on the Asus ROG Zephyrus Duo 15 Review. The Asus ROG Zephyrus Duo 15 is one of the most outrageous gaming portables around – a dual screen machine packed with top-tier components. It comes with what Asus calls a ‘ScreenPad’- a 14.1 in screen that sits above the keyboard designed to hold chat tools, browsers and other secondary software during gameplay.

Its own launcher can group frequently used apps together, and snap windows around, which is useful. However, game support is thin on the ground; the ScreenPad adds features in Dying Light II, League of Legends, Dota 2, Fortnite and CS:GO, but no other game support is currently available.

The ScreenPad has a resolution of 3,840 x 1,100, which means a density level of 283ppi, matching the pixel density of the main 15.6in 4K panel. The latter has a 60Hz refresh rate and Nvidia G-Sync, which means it’s better suited to cinematic single player experiences and productivity applications than fast-paced multiplayer gaming.

Indeed, the Duo’s screen is Pantone validated and can display 100 per cent of the sRGB and Adobe RGB gamuts for color-sensitive workloads. Alternatively, you can pick up the Duo with a 1080p 300Hz G-Sync panel.

This pricier model deploys an RTX 2080 Super Max-Q GPU, which has 3,072 stream processors and 8GB of memory. Meanwhile, the Intel Core i9-10980HK CPU has eight Hyper-Threaded cores and a peak Turbo speed of 5.1GHz. The supporting spec is all top gear too.

On the outside, the Duo is subtle and sturdy, with a 2.4kg weight and 21mm thickness. That’s larger than most laptops, but not too bulky considering the hardware.

Connection options are reasonable too, with one USB 3.2 Gen 2 port and a USB-C type port that supports DisplayPort, power delivery and Thunderbolt 3. There are also two USB 3.2 Gen 1 connections and an HDMI output, but no webcam or card reader.

The large second screen means the keyboard is punted to the front edge, though, which doesn’t make for comfortable typing, and Asus’ bundled wrist rest is a heavy rubber unit that isn’t particularly well cushioned – it’s not useful if you have large hands.

The keys themselves have a moderate 1.4mm of travel, and the buttons are fast and responsive, although they feel soft rather than crisp and weighty. They’re fine for gaming and typing, but they lack the satisfying tactile experience of mechanical keyboards. The cursor keys are also tiny, and the RGB LED backlighting is patchy and inconsistent.

Meanwhile, the touchpad is narrow and positioned in an unusual location on the right. Cleverly, you can also use it as a light-up numeric keypad, which works surprisingly well, although it’s not as good as using physical keys.

The RTX 2080 Super struggles at the screen’s native 4K resolution. Its Shadow of the Tomb Raider and Total War: Warhammer 11 minimum framerates sat just below 30fps, and it couldn’t get beyond 28fps in Battlefield V with ray tracing on High, even with DLSS enabled.

We only achieved playable frame rates by dialing down the graphics – with those three titles at High, the minimums sat between 30fps and 33fps, and at Medium, those figures improved to 34fps and 40fps. It’s difficult to get the most intensive games to run smoothly without graphical compromises, and the Asus’ Turbo mode doesn’t make a huge difference either.

The Asus’ 1080p minimum frame rates are good though. It ran Shadow of the Tomb Raider at 81fps, Total War: Warhammer II at 60fps and Battlefield V at 51fps with ray tracing on High – you’ll be better off running your games below the screen’s native 4K resolution.

Meanwhile, the 8-core Intel CPU will handle any CPU­ intensive game and almost any content-creation task. Its Handbrake score of 532,090 is a highlight, showing great multi-threaded performance, although AMD’s 8-core Ryzen 9 4900HS is even quicker here.

The Asus’s thermal performance is mixed though. Its CPU and GPU delta Ts of 63°C and 42°C are fine, and the Asus is no louder than any other laptop when gaming at normal settings. However, the Turbo mode is loud, and it’s noisy when tasked with tough workloads. The base panel became extremely hot during gaming and system tests as well.

On the plus side, the primary display has a great contrast ratio of 1,290:1, which makes for ample depth and vibrancy. Its average delta E of 3.29 is decent, and the color temperature of 7,234K is fine – a little cool, but not ruinous. The display lived up to Asus’ Adobe and sRGB gamut coverage claims as well.

The only issue came in the uniformity test, where the screen lost 16 per cent of its backlight strength in the corners. That’s mediocre, but it won’t affect gaming. In short, the display is easily good enough for gaming and for most workloads.

You’ll only need more accuracy for pro-level graphics work. The ScreenPad is dimmer, but its 1,000:1 contrast ratio is fine for secondary use, although it has shallow viewing angles and can look washed out.

Meanwhile, the 4W speakers deliver loads of volume and crisp, clear mid-range sounds, but the top end is slightly tinny and the bass is weak. Not surprisingly, battery life is disappointing. The Asus lasted for just under an hour when gaming, and using the battery restricts GPU speeds as well.

The Asus Duo has a versatile specification, solid screen quality and that second display, which is an innovative feature that could be useful. The ScreenPad currently lacks game support, though, and it contributes to compromised ergonomics.

The Asus also has a stratospheric price, and its GPU can’t play games at the native 4K resolution. Ditch the ScreenPad and you’ll get a laptop with the same CPU and GPU for much less money. It’s great to see some innovation in the world of gaming laptops, but despite its frills, the Duo has too many niggles to justify its high price.