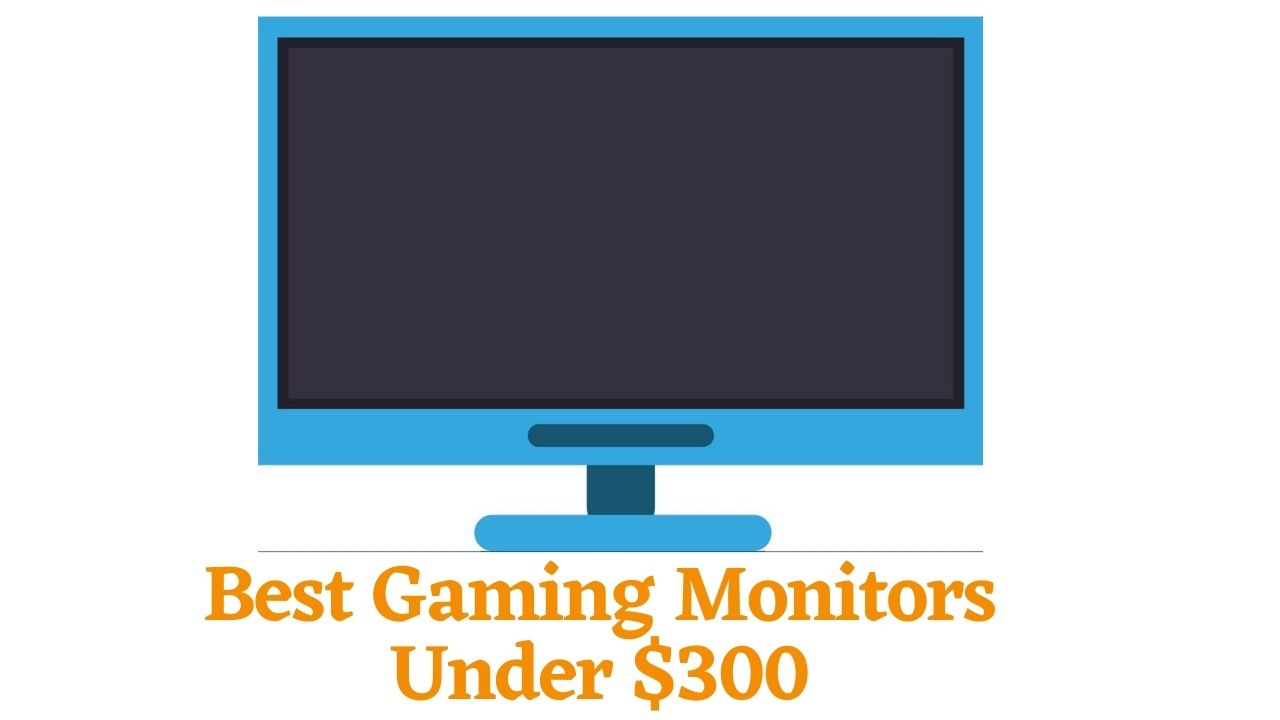 You might be looking for an advice on buying best gaming monitors under 300 dollars in 2021. So, we look at top 5 monitors, for under $100 to $300, to see which models offer the best value for money.

A few months ago, when we were setting up our desks to spend the next few months playing games, new monitors were very hard to come by. Thankfully, the manufacturers have now replenished their stocks, and it’s now a much better time to buy.

To celebrate this, we’ve picked out four monitors to compare and contrast, all of which you can pick up for less than $300, with the most affordable costing just a smidgen over $100. In exploring the range of choices, we’ve used our tests to see whether the most affordable models compromise on quality, and whether the more expensive units have extras that are worth paying for.

This AOC monitor is the cheapest IPS (In-Plane Switching) monitor we’ve ever seen. This is great news in itself, because IPS screens are generally a lot better than their cheaper rivals, but this one is particularly good. The screen only measures 24in across the diagonal but, with a resolution of1,920 by 1,080 pixels, it’s sharp enough not to show any jagged edges at normal viewing distances.

The monitor performed remarkably well in our tests. The contrast ratio is solid at 1,122:1 but the color accuracy in the monitor’s average Delta-E test returned 1.26 – a much better result than we usually see in monitors of this price, and the best result of all the monitors in this Group Test.

The 24B2XH’s stand only allows for a small amount of forwards and backwards tilt adjustment, and is made of lightweight, flimsy­ feeling plastic that wobbles a little when you knock your desk or prod at the screen. However, its slim bezels along the left, right and top edges salvage a sufficiently elegant design.

It’s very slim, too, and AOC includes both HDMI and VGA cables in the box, so you’re ready to go straight away. The one disappointment is that the power supply isn’t built in. Instead, you’ve got to find room on or around your desk for a dangling external adapter, which is less than satisfactory.

The monitor isn’t exactly chock full of inputs, either. You get an HDMI and a VGA port, both situated in the center of the rear panel next to a 3.5mm headphone output. This might not seem like much, but it does cover most PCs and laptops, though you would need an adapter if your gaming PC only has a USB Type-C port.

This monitor may not be equipped with luxuries such as USB Type-C connectivity or a height-adjustable stand, but it’s got quality where it counts. The screen is phenomenal for the price, offering great contrast and color accuracy. As long as your PC has the right type of connections, this would make a fabulous upgrade for remarkably little money.

This 27in monitor has QHD (Quad High Definition) resolution of 2,560 x 1,440 pixels, which makes it the highest resolution monitor in this test.

The unit is mostly white, even down to the bundled cables, which gives it a sleek and modern look without being flashy. There are black bezels at the top and sides, but they are so elegantly slim that you’d barely notice any gap if you were to stand two of these screens side by side in a dual-screen setup. The stand is highly adjustable, with the full set of height, tilt and pivot adjustments, as well as 90° rotation to put it in portrait mode.

The monitor has a pair of 2W speakers built in, which are fine for Windows sounds but not great for movies or music. However, there’s also a3.5mm line-out jack, so you can plug in your own speakers or headphones, and a line-in for connecting a microphone. It also has HDMI, DisplayPort, DVI and dual USB 3 ports for connecting your PC.

This liyama model performed very well in our tests. With the brightness set to 100 and everything else to its defaults, the screen reproduced 97.99% of the sRGB color palette with a Delta-E score of 1.63. Its peak brightness reached 370cd/m2, and its matt finish eliminates any problem with glare.

While the liyama’s high screen resolution hints at gaming prowess, this is a monitor that’s best suited to office work. Its DisplayPort connection runs at up to 70Hz and is compatible with AMD FreeSync, if you have a compatible graphics card, but the remaining ports are 60Hz only and not FreeSync compatible. We found there was some blurring on fast moving objects, though it wasn’t too bad.

This screen doesn’t try to wow us with advanced features or cutting-edge connectivity but matches a classy, practical design with a high-performing panel that works brilliantly straight out of the box. If you’re working from home and need a generously sized monitor for multi-tasking various open windows, this is a brilliant option.

Like previously mentioned AOC monitor, this Phillips model’s 24in screen runs at Full HD resolution (1,920 x 1,080 pixels). But there are some extras to justify its higher price.

The unit’s USB Type-C port not only carries the video signal to your monitor but, if connected to a laptop, can also charge the battery. It has HDMI, DisplayPort and VGA inputs, and the IPS panel has a matt finish to keep glare to a minimum. In our tests, using its default setting, the screen recreated 97.2% of the sRGB color standard, with a Delta-E score of 1.33. Peak brightness was 285cd/m2 and contrast measured 980:1.

This is the most eco-friendly monitor of the group. Made from recycled plastic, its infrared detector senses when you’re sitting in front of it and dims to save power if you wander off.

This excellent monitor would have fared better in our tests if it weren’t for the similarly specified and equally strong AOC model undercutting its price. However, you may find its bonus features worth paying for.

f you’re happy to spend more money to get gaming-specific features, this 27in screen incorporates a slight curve to make its extremities more immersive. Despite its generous size, the screen’s resolution is only Full HD (1,920 x 1,080 pixels), but it’s the refresh rate of240Hz that makes this stand out

The other monitors tested here peak at 75Hz, so if you have a compatible AMD FreeSync graphics card, this should produce significantly smoother gaming graphics. It comes with two HDMI ports and one DisplayPort.

Out of the box, we measured 97.9% of the sRGB color standard and a peak brightness of 306cd/m2, though color accuracy was a bit disappointing with a Delta-E average score of 2.22. This screen uses VA (Vertical Alignment) rather than IPS, which provides high contrast – we measured it at 3,336:1.

If you’re into gaming and want a monitor with a higher refresh rate, this is a good option that also looks the part. However, you are losing out on the IPS screens of its rivals, and it’s significantly more expensive.

Whenever we test a screen, we use a colorimeter to physically measure its performance. We test what percentage of colors in Microsoft’s sRGB color standard the monitor can reproduce, how bright it can get, what the contrast ratio is (the difference between its brightest white and darkest black) and the Delta-E score, which measures the average difference between the color sent to a screen and the measured result – the smaller this number, the better.

Our top choice goes to the AOC24B2XH, a 24in Full HD resolution monitor that offers amazing value for the money. The screen itself is excellent for the price, and while it doesn’t have the bells and whistles of its rivals, if you’re just looking for an affordable monitor that’s great to look at and does the job well, this model is worth every penny and more.

f your budget stretches further,and you’re happy to pay more than double, the liyama XUB2792QSU-W1has a larger screen, more flexibility and the highest screen resolution of this group. There are few flashy gaming features but the monitor performed solidly in our suite of tests.

If it’s extra features you’re after, and you’re happy to pay more for them, the Philips243B9 is the same size and resolution but comes with a healthy smattering of bonuses,including a USB Type-C port that’s great for connecting to modern laptops and an eco-friendly sensor to save electricity.