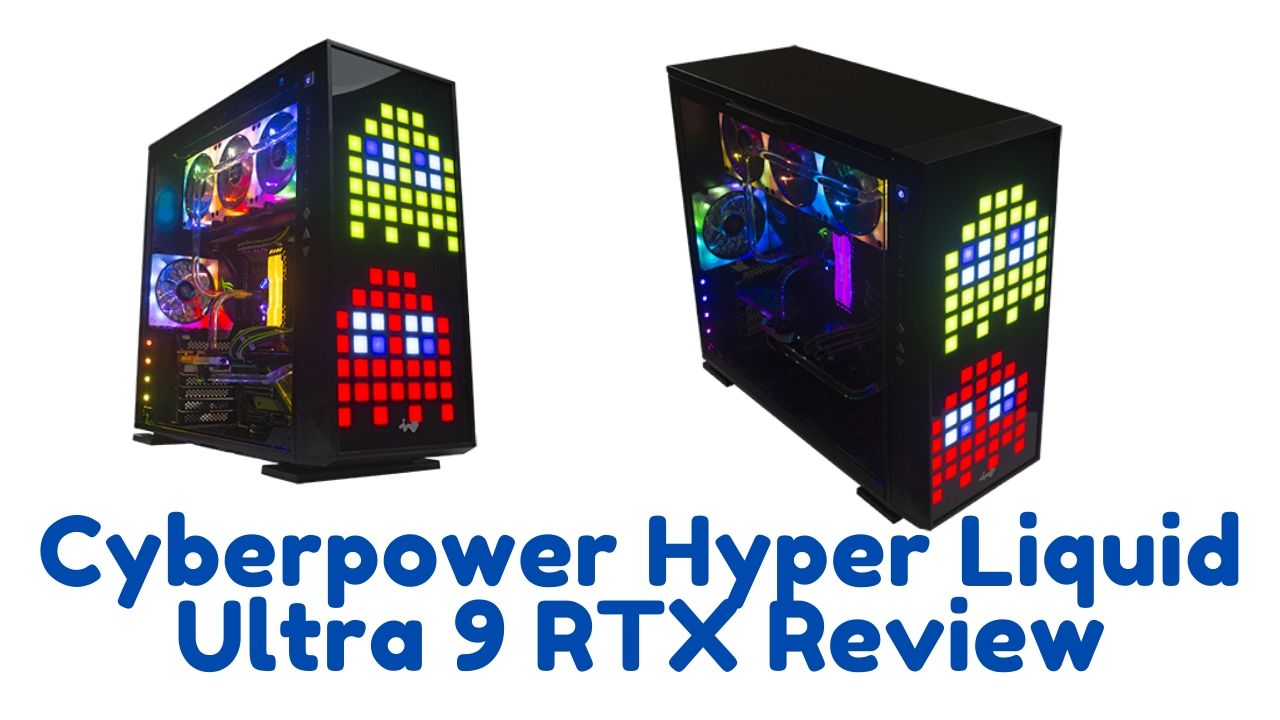 CyberPower’s Hyper Liquid Ultra 9 RTX is one of the most outlandish builds we’ve seen for months. The wild looks start with the InWin 309 chassis, which has a front panel featuring 144 addressable RGB LEDs. It makes for a bold grid that can be used to create patterns, effects and customisable designs.

The 309 has 12 built-in lighting patterns, including abstract designs as well as candles and clocks. Buttons on the chassis can alter the brightness and speed of the LEDs, and they switch between modes and change fan speeds too. There’s also a Windows app that can be used to change LED modes and create your own animated designs, plus a microphone in the roof that can alter the speed of some effects.

The InWin is rock-solid, and its PSU shroud has been moved to the top of the enclosure and reconfigured to hold water-cooling hardware. CyberPower’s loop relies on Corsair Hydro X components, including an XD3 pump and reservoir, XC7 and XG7 waterblocks for the CPU and GPU, and a 360mm XR5 radiator. They’re linked together with hard tubing.

The radiator is illuminated with three InWin EGO fans, which have RGB LED surrounds, and a fourth one functions as an exhaust. Their bright lights are joined by lights around the entire chassis, and there are more lights inside the waterblocks and DIMMs.

This bright rig won’t be to everyone’s tastes, but there’s no denying the good work here – it looks amazing to us. The front of the enclosure is neat and includes braided power cables, while the upgrade room includes two 2.5in mounts and a 3.5in bay. There’s also a control box with room for more fans, lights and temperature sensors. The cabling is a little untidy around the rear, but that’s our only issue with the build.

This rig uses an AMD Ryzen 9 3950X, a 16-core beast that runs at stock base and boost speeds of 3.5GHz and 4.7GHz. It’s joined by 32GBof 3200MHz DDR4 memory and a Corsair MP600 PCI-E 4 SSD. There’s a 4TB hard disk as well. Meanwhile, graphical power comes from an Nvidia GeForce RTX 2080 Ti GPU. We’re a little disappointed that the watercooled GPU isn’t overclocked, but its conventional base and boost speeds of 1350MHz and 1545MHz remain decent, and the GPU is already immensely powerful.

It slots into an Asus ROG Strix X570-F Gaming motherboard, which has loads of PCI-E slots, a vacant M.2 connector and seven full-sized USB 3.2 ports, alongside a Type-C connection. Connection options are generally fine, with every mainstream feature you’ll conceivably need.

However, there’s no Wi-Fi and no 2.5Gbps Ethernet either. The board’s USB ports are also now a step behind the latest Intel Z490 boards, which include faster USB 3.2 Gen 2×2 connections. The 32GB memory configuration fills all four memory slots so there’s no upgrade path, but the four Corsair Vengeance RGB Pro modules do look great together.

The system is powered by a Corsair RM850x unit, which is fully modular and has an 80 Plus Gold certification. Finally, CyberPower’s warranty has three years of labour coverage and two years of parts protection, along with six months of collect and return service. That’s fine, but we’d expect more collect and return cover at this price.

The 16-core CPU delivers tremendous speed. It’s brake video encoding score of 944,160 is a highlight, indicating that 4K video work will be swept aside. That scores more than 200,000 points ahead of the new Intel Core i9-10900K, which has fewer cores. The AMD part will handle any tough work application,including high-end video, content creation and CAD software. The PCI-E4 SSD also delivered read and write speeds of 4,974MB/second 4,267MB/sec, which is stellar– far better than any PCI-E 3 SSD.

Meanwhile, in our 4K game tests, the GPU delivered minimum frame rates between 31fps and 53fps, and that 31 fps figure in Battlefield jumps up to 51fps if you enable DLSS. Gaming And Single-threaded performance is an area where Intel-based systems, such as this month’s Scan system, have the upper hand, but the CyberPower isn’t far behind and it has a much quicker multi-threaded pace too.

The CyberPower was impressive in thermal tests too, thanks to its custom water-cooling loop. Despite the lack of front intake fans, its CPU and GPU delta Ts peaked at a balmy 55°C and 43°C. The noise levels weren’t bad either – there’s a constant fan rumble, but it’s never loud or irritating.

CyberPower’s Hyper Liquid Ultra 9 RTX looks incredible, and its illuminated front panel makes for a great talking point. Its water cooling is excellent too,and build quality is consistently Impressive. This PC doesn’t just look the part either – its 16-core The CPU delivers huge power for almost every work task, the GPU is quick, and it has a lightning-fast SSD and a decent motherboard.

The Motherboard misses out on a couple of features compared with Intel’s latest Z490 products, and the lack of a GPU overclock is a little disappointing at this price. Of course, it’s also easily possible to get this level of power for less cash if you chew the light-up case and water cooling. If you have the cash to splash, though,and you want an eye-catching system with lashings of power, the HyperLiquid Ultra 9 RTX is a superb build.