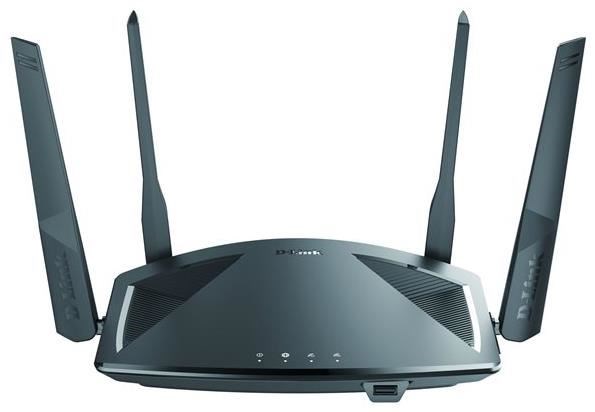 There are faster and cheaper Wi-Fi 6 router options, but don’t rule out this solid and versatile router. Imposing, hefty, ostentatious… the D-Link DIR-X1860 is none of these things. This Wi-Fi 6 router occupies a modest 224 x 166mm footprint whilst weighing an insubstantial 525g.

The case design isn’t exactly boring, but with its simple curved shape and matte black finish it’s no conversation piece. At the front, the only visual decoration is four LEDs that glow white to indicate the power is on, the internet connected and your 2.4GHz and 5GHz radios are up and running.

Simplicity also rules the day at the rear: four Gigabit Ethernet sockets are joined by a yellow WAN port that connects to your modem. (Note that, as reflected by its price, no modem is supplied.) Beside that WAN port lurks a WPS button, and a recess at the other end houses the reset button. That’s it for connectors: if you were hoping for USB, you’re out of luck.

Also keep in mind that this is a dual-band router, promising Wi-Fi connections of up to 574Mbits/sec on the 2.4GHz band and i.2Gbits/sec on the 5GHz band when used with compatible Wi-Fi 6 devices. Naturally, it works with slower 8o2.nac (Wi-Fi5) clients too, so it makes an affordable drop-in replacement for an ageing last-generation router (although, again, there’s no built-in modem).

The dual-band design means that bandwidth could get bottlenecked when large numbers of Wi-Fi 5 clients are connected, but that’s mitigated by support for 4×4 MU-MIMO.

Considering the price, D-Link has been generous with software features. The web portal offers everything you’d expect and more, including a simple firewall that you can use to enforce global blocks and filters for all connected devices, as well as support for L2TP over IPsec, allowing you to route all internet traffic over a compatible VPN.

I’m also a fan of D-Link’s visual QoS management widget, which enables you to assign priorities to different devices by simply dragging their icons from a list into a priority table. And if you register with the D-Link Cloud service, you can use either Alexa or Google Assistant to control the guest network and reboot the router.

A basic parental control module is included too, which lets you block selected devices according to a weekly schedule. There’s neither logging nor custom web filtering, but for a free feature we can’t complain too much. The only slight irritation is that while parental controls are applied to clients from the homepage of the web portal, the access schedules have to be defined under the management tab. I found it easier to configure using the D-Link Wi-Fi app for Android and iOS instead, which puts everything in the one place.

The few low-cost Wi-Fi 6 routers that PC Pro has tested so far have put in respectable performances, but they haven’t been able to match the speeds of their high-end brethren. The $120 question, therefore, is whether the D-Link DIR-X1860 can punch above its price.

I tested this by setting up the router in the usual spot in my living room, then walking around my home with a laptop, copying a series of files to and from a NAS appliance (connected to the router via Ethernet) to measure file-transfer speeds in different locations. To be strictly accurate, I used two laptops: one with an Intel AC9560160MHz Wi-Fi 5 adapter and one with an integrated Wi-Fi 6 Intel AX200 2x2160MHz card.

The top table opposite shows the speeds I experienced over Wi-Fi 6 in four key areas of my home. For context, I’ve also provided the speeds I obtained from the Honor Router 3, the $160 Netgear Nighthawk AX4 and the top-performing but $280 Asus RT-AX88U.

While close-range performance was nothing to sniff at, the signal dropped off sharply in other parts of the house, with speeds falling well behind the best-in-class Asus. For sure, the D-Link showed strengths too – notably an encouraging 35.2MB/sec in the bedroom – but its overall performance over Wi-Fi 6 was merely in line with what we’ve come to expect from a sub-ciso router.

Taking into account the element of chaos that’s inherent to wireless networking, we’d go so far as to say that the Honor and D-Link gave functionally identical performances over Wi-Fi 5, while the Asus and Netgear models brought up the rear.

If you’re looking for Wi-Fi 6 router at the lowest possible price, there’s no buying decision to make. The Honor Router 3 costs much less than the DIR-X1860, and provides similar performance over both Wi-Fi 5 and Wi-Fi 6 connections.It would be a mistake, however, to think of the DIR-X1860 simply as a more expensive alternative. It does things that the Honor Router 3 won’t; the firewall and VPN support are excellent touches, and I haven’t even mentioned D-Link’s open-ended dynamic DNS support.

On top of that, the DIR-X1860 offers 4×4 MU-MIMO, while the Honor Router 3 is limited to 2×2. The difference is marginal, but Wi-Fi 5 devices will undoubtedly be with us for some time to come, so anything that helps manage contention on a dual-band router is to be welcomed.

My one caveat is that, despite the fact it’s a new release, the DIR- Xi86o’s price fluctuates. At one point I saw it on sale for $100, but it’s now stabilized at a less tempting $120. Even at this higher price, the D-Link DIR-X1860 provides something we’ve been missing for too long: a low-cost Wi-Fi 6 router option that combines credible performance with a strong feature set. If that sounds appealing, there’s no reason to wait any longer – unless, of course, you’re holding out in hope that the price will go back-down.