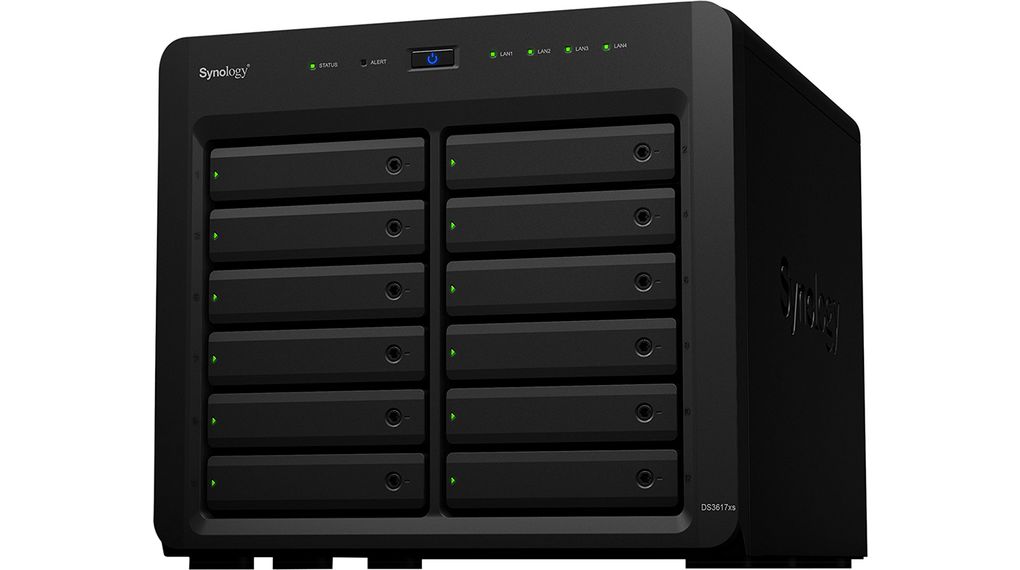 Read our detailed review on Diskstation Synology DS3617xs 2020. A small business server that offers flexibility and performance in a compact package.

Aimed at small medium businesses that need a lot of performance, the $3,600 Synology DS3617xs is not your average NAS. Think Rackstation server in a NAS form factor, optimised for virtualisation and performance intensive tasks, as well as backing up loads of data.

While the underlying hardware is getting a little long in the tooth, the Synology software is continually updated with new features. The flexibility of the NAS server and associated ecosystem and addons also means it can perform well across a broad range of businesses.

It ships with 16GB of DDR4 RAM, which is user upgradeable to a total of 48GB. Round the back it has four Gigabit LAN ports that can be used for link aggregation or failover. You also get dual USB 3.0, plus two expansion ports. But most importantly, the  DS3617xs has Gen 3 PCIe x8 expansion slot, for add in cards.

The name of the game is flexible upgrade-ability. The RAM is easily self-installed via a removable side panel, and you can connect external HDDs via USD 3.0. The expansion ports can support Synology units such as the DX1215, for a total of an extra 24 drives. The PCIe slot means you can drop in a variety of 10Gbps network cards, or a M2D18 M.2 SSD adaptor. Annoyingly with the latter, the DS3617xs itself only supports SATA SSDs, while the adapter can handle NVME.

Software is where the NAS server truly stands out, and the name of the game here is visualizations. Don’t get us wrong, the DS3617xs has hardware AES 256-bit encryption, and can handle the usual automated backups, data storage, office collaboration, private cloud storage, mail servers and more, but that quad core Xeon CPU wants to be put to work.

You can run virtual machines using Windows and Linux, quickly creating (or re-creating in the event of a problem) resources for users and clients. The Virtual Machine Manager is quite feature rich, and provides an easy interface manager software running on your NAS. It also, supports industry standards such as VMware vSphere, Microsoft Hyper-V and Citrix Xen server.

So how does it perform? Dropping in six Seagate Ironwolf Pro drives is the work of minutes, and the Synology software walks you through your desired setup. Exact performance figures are highly dependent on your RAID setup, network and add in cards. With six Ironwolf Pro NAS drives in RAID 0, we managed up to 2,431Mbps reading and 4,423Mbps writing 5GB files over a 10GbE Ethernet connection.

The same goes for virtualisation, and Synology recommends up to eight if you run the full 48GB of RAM.  The DS3617xs is fairly quiet, but somewhat power hungry and peaked at 103W under load. It’s not perfect, but for great software and server performance in a desktop NAS box, the DS3617xs is worth considering for your business.

Despite a few minor downsides, the DS3617xs holds up quite well and offers flexible performance and great software features.