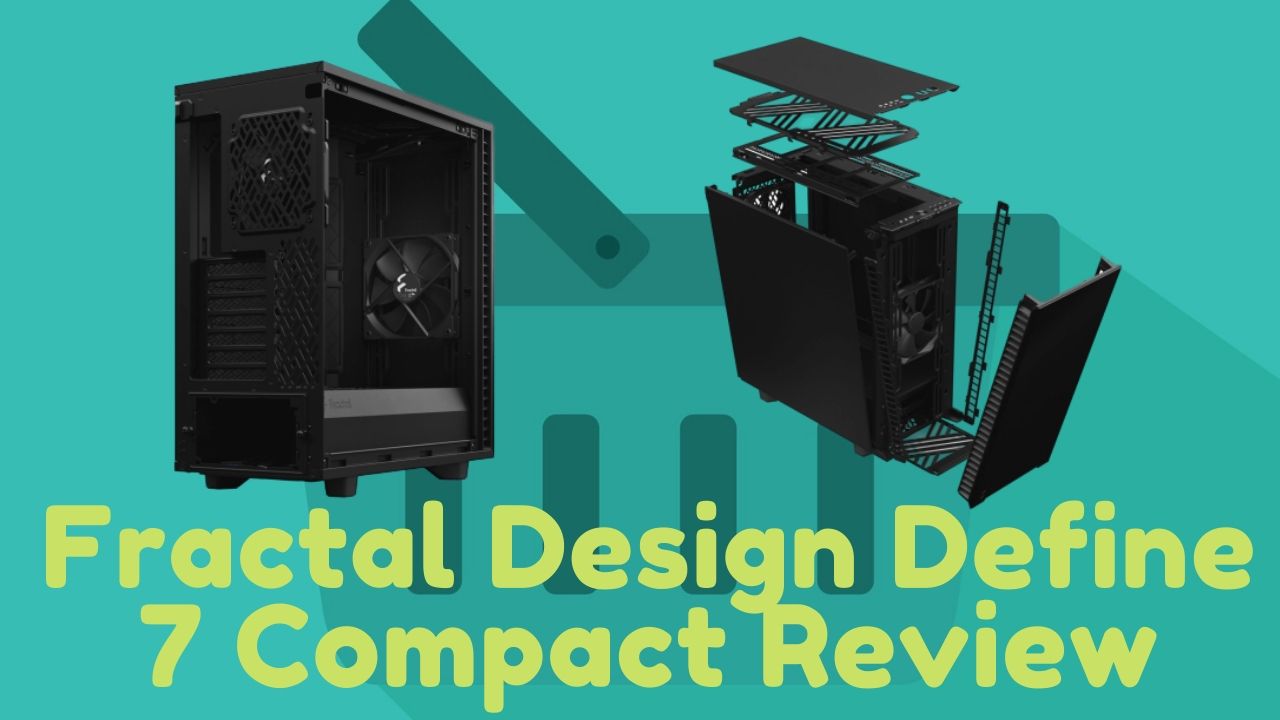 Externally, Fractal Design’s recent cases don’t appear to have changed much from their predecessors, but the company has been beefing up accessory packs, customization options and features quite significantly compared with its ATX towers from a year or two ago.

The Define 7 Compact follows on from the larger Define 7 case, which we’ll hopefully be reviewing soon, but it sports a much lower price tag and, as its name suggests, a smaller volume.

It measures just 21cm wide and 42cm long, while the Define 7 stretches to cover 24x54cm. It’s a suitably space-efficient case, then, but you do lose some of its larger siblings features as a result.

There’s no fan hub, no multi-purpose brackets for hard disk and pumps,no vertical GPU mount and no option to stack hard disks in the front with optional brackets. There’s much less space for water-cooling radiators too.

However,many of the best features remain. You Get Two case tops, catering for solid or vented roof options,and they even fit around the front panel ports, replacing the entire roof each time.

What’s more,the roof fan mounts and frame beneath them can also be removed, along with the case top. Niftily, this whole setup means the entire roof section can be peeled away to make building your PC far easier.

Given the compact dimensions, this feature is perhaps even more useful here than in the larger case. There are six Velcro Ties spread around the back of the motherboard tray too, so you shouldn’t need many fiddly cable ties to anchor your cables.

Meanwhile, the side panels, one of which is tempered glass on our sample, can be removed without tools. They pop into place using metal pins, with small but handy grips at the rear to pry the panels open. If you don’t need the tempered glass panel, a solid panel version of the case is available for around $10 cheaper than this model.

The side other panel is covered in noise-absorbing foam and, to prevent dust ingress, the case sports pull-out filters in the base and roof. The brushed aluminium front panel is closed at the front, but uses large side vents to allow air into the case.

Popping the front panel off is fairly easy, and doing so reveals two pop-out filters, which are much easier to clean than the fixed mesh in many cases of this type. You also get full-fat USB 3.1 Type-C support on the front panel, plus a generous count of four Type-A ports.

Out of the box, there are two fans included – a 140mm model in the front and a 120mm fan in the rear, which is how we’d ship the Define 7 Compact if we made it too, although another front fan would be welcome.

The front fan area can cater for 360mm or 280mm radiators with a width restriction of 145mm, or a trio/pair of 140mm fans. However, thanks to a pair of pop-out plates in the PSU cover, there’s an additional 120mm of space behind the front fan to install a radiator

A radiator in this area will quickly eat into the graphics card clearance, though, which stands at 341mm, but there’s plenty of short-PCB models out there. The roof can house a 240mm radiator too so, despite its size, the Define 7 Compact can house a potent water-cooling system, whether you opt for a DIY setup or an all-in-one liquid cooler.

If you’re building an air-cooled system, there’s 169mm of CPU cooler clearance, which caters for most air coolers, including very large models such as Corsair’s A500.

Finally, there’s space for two hard disks and two SSDs, which is standard for a case of this size and is enough for most people, unless you have a handful of hard disks to transplant from your old system. None of these mounts is tool-free, though, so you’ll need to deal with numerous screws, but they’re at least vibration-dampened.

The Fractal’s fans proved to be extremely quiet out of the box, spinning at under 1,200rpm at full speed, but shifting a reasonable amount of air. They lack PWM connectors, though, so you’ll need to head to your motherboard’s EFI to make sure they’re not fixed at full speed.

The CPU deltaT of 54°Cwas enough to match the Thermaltake H550 TG ARGB, but the better-ventilated Phanteks Eclipse P600S offers superior CPU cooling, with a 4°C lower delta T, albeit with a little more noise. The be quiet! 500DX is also much better here, and includes some seriously funky RGB lighting and a more spacious chassis.

The GPU delta T of42°C is much more competitive, though, leaving the Thermaltake H550 TG ARGB way behind, and close to matching the best results of the NZXT 510 Elite and bettering the be quiet! 500DX, thanks to its large 140mm front fan pointing straight at the graphics card. Sadly, swapping the top panel for the vented one only saw 2°C fall off the CPU delta T – we suggest sticking with the closed panel unless you’ll be installing extra fans or radiators in this location.

As with most closed front panel cases, the Fractal Design Define 7 Compact doesn’t top the cooling charts, but its stock fan configuration still does a good job of feeding your CPU and graphics card with air. You can certainly get away with using the case in its stock configuration, even if you plan on building a high-end PC.

There’s plenty of scope for expanding the cooling, though, thanks to a well thought-out interior, and there’s ample space for a modest water-cooling system too. The swappable top panel is a nifty touch, as is the fact that you can remove the entire top section for easier access.

The be quiet! 500DX offers more bang and pizzazz for your buck, but if you want a more compact, understated case, it doesn’t get much better than the Define 7 Compact.

If you want a compact, understated case with big cooling potential, it doesn’t get much better than this.