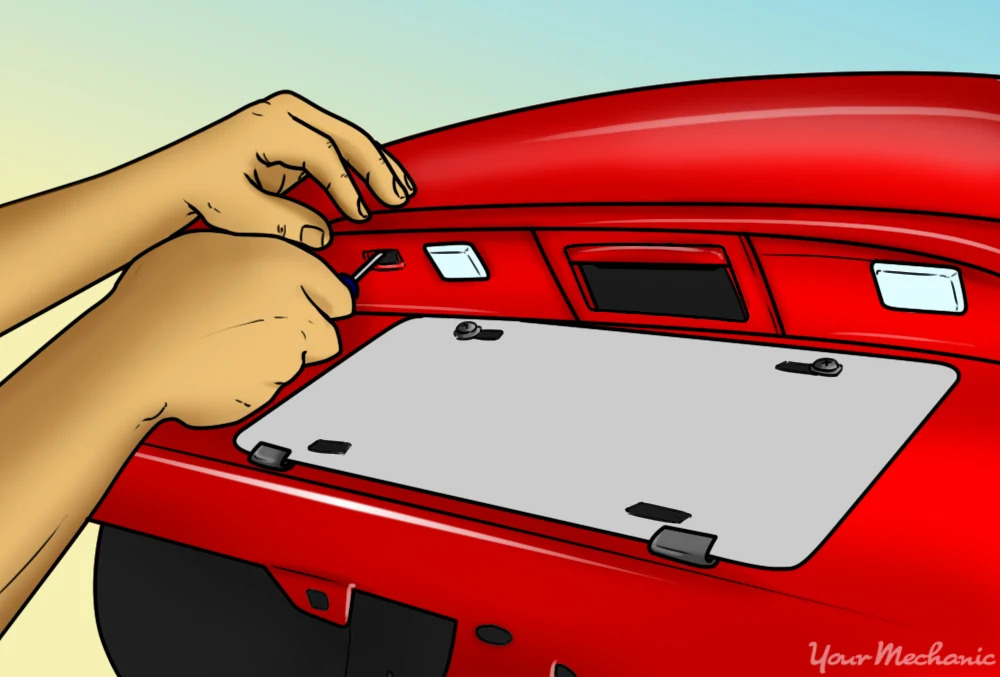 The rear registration plate light on a Bus is not only quite dimly lit, but expensive to replace at around £25 or more for the lens and bulb holder.

Upgrading to an LED light unit not only helps to improve the illumination of the registration plate. It’s also a cheaper means of replacing the light unit if it’s damaged, but it does involve lots of time and some creative thinking.

Strips of LEDs are cheap to buy, especially online, and there’s a wide range of them that can be used for a rear registration plate.

Most are powered by a 12-volt supply (the same as a Bus’s battery) and are supplied with two wires for the positive and negative wires that are already fitted for the standard light unit.

Unfortunately, you’ll be very lucky to find one that’s the same size as an original light unit, so a new mounting panel will have to be made. Our steps show one being made from the side panel of an old tumble dryer.

If you have a sheet of clear poly carbonate (Perspex), then this can also be used, allowing the LEDs to be mounted on the inside.

The standard of finish for making your own LED registration plate light all depends on your skills, the resources you have and the time you are willing to put into this job.

We’ve perhaps adopted quite an amateurish approach to help outline the low level of sophistication for the work involved, but a better finish is possible.

Follow the simple steps given below too successfully install led license plate to your vehicle.

The standard registration plate light is usually secured with a couple of crosshead screws to the underside lip of the engine lid. It may be easier to raise and secure the engine lid before removing the light. After undoing the screws and extracting the light unit, detach the two wires connected to it. Make sure the headlights are off to avoid the risk of causing a short circuit when detaching the wires. Check the size of your replacement LED light unit against the old light unit. Switch on the headlights, making sure the existing wires are not touching the metal part of the engine lid or each other, and connect the LED’s wires to them. Note how they should be connected – they can only be fitted one way.

The new LED light unit probably won’t be the same size as the old light unit, so a new mount will need to be made for it. Measure the size of the hole in the engine lid where the old light unit was fitted. It may be easier to make a mount that’s bigger than this hole so that it can be fitted over it. If so, use the old light unit as a template, but make the new mount a little larger in size. Photographs 5 and 6 show a new mount being cut out from the panel of an old tumble dryer. This thin sheet metal is ideal for making a new mount and can be cut with tin snips or a hacksaw and shaped with a flat file.

Several holes will need to be drilled through the new mounting panel to be able to secure it to the engine lid, fit the LED light unit and route the wiring through the back of it. Start by marking and drilling the mounting holes, using the old light unit for guidance. Use a hammer and dot punch to mark where to drill. If possible, use a pillar drill for greater accuracy. After drilling the first two mounting holes, trial fit the mount to ensure it’s correctly aligned. Next, drill the hole for the wires, followed by the holes for mounting the LED light unit.

Assemble the new mount and LED light unit, then trial fit it onto the engine lid to check it’s in the correct position. Remove it, fit new connectors onto the ends of the wires and then refit it with the wires connected this time. Switch on the headlights and check the LED light unit is illuminating the registration plate. The light needs to be directed at the registration plate and not visible to drivers behind the Bus, so you may need to cover the outside edge of it with electrician’s tape or angle the mount to avoid this problem. For a more professional finish, paint the mount in the same colour as the engine lid.