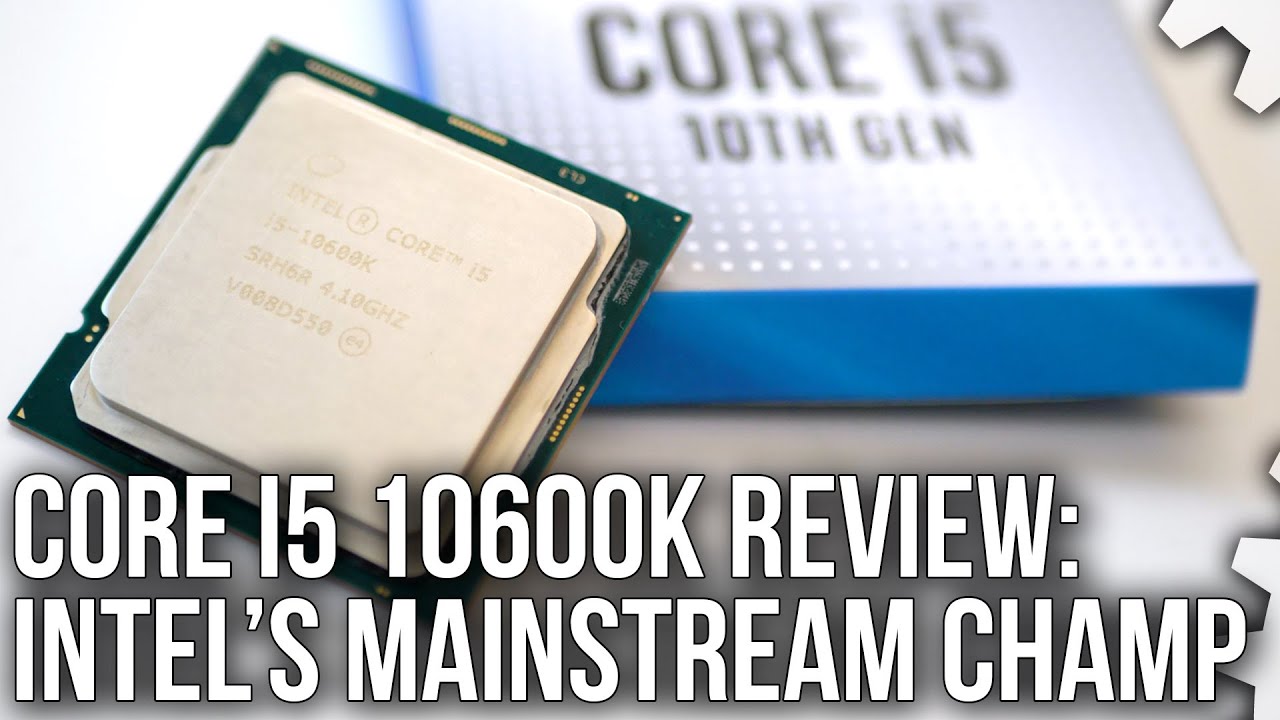 Read our Intel Core i5 10600K Review The lower down Intel’s 9th gen product stack you go, the more the lack of Hyper-Threading seemed to hurts its chances against AMD.

The likes of the Core i5-9600K were adequate for gaming, but they were hopelessly outgunned in multi-threaded tasks, even by cheaper AMD CPUs.

Likewise, the Core i5-8600K too also had six cores and six threads like its 9th-gen successor, but arrived too late to steal AMD’s thunder. What Intel needed, above all else, was to boost multi-threaded performance, either by increasing core counts or adding Hyper-Threading. Thankfully, that’s now been done, with every 10th-gen model supporting Hyper-Threading, including the Core i5-10600K.

Which means it can execute 12 concurrent threads, instead of just six like its predecessor, and this essentially makes it very similar to the venerable Core i7-8700K.

Both CPUs have the same number of cores and threads and under the hood, and they both have 12MB of L3 cache.

Sadly, you won’t be able to upgrade to the new chip unless you buy a new motherboard, though, as the Core i5-10600K uses the new LGA1200 socket and requires a Z490 or other 400-series Intel chipset motherboard.

Frequencies are a fair bit lower than its more expensive sibling, peaking at just 4.8GHz. This is because the Core i5-10600K lacks both Intel Turbo Boost Max Technology 3 and Thermal Velocity Boost. While the boost on the Core i9-10900K proved to be a tad unreliable in our testing, it still potentially represents a 500MHz advantage over the Core i5.

The fact that AMD is set to launch Zen 3 CPUs later this year is beside the point for now, as Intel needs to grapple with Ryzen CPUs that are already available first, as well as persuading people to make the necessary move to an LGA1200 motherboard.

We hit the same frequency of 5.1GHz across all of the Core i5-10600K’s cores as we did with the Core i9-10900K, again with 5.2GHz being stable in most (but not all) with a 1.35V vcore. We reined in the vcore to 1.32V for the 5.1GHz clock speed, which was slightly higher than we needed with the 10-core part, but the CPU ran cooler, rarely topping 80°C under full load with our water-cooled test bench.

Once overclocked, though, the Intel CPU bettered every AMD CPU in the image editing test, as well as the Ryzen 5 3600X in the video encoding test, but it still failed to come close to matching the Ryzen 7 3700X with its eight cores and 16 threads.

Cinebench revealed a similar situation, where AMD CPUs were far better value at stock speed, but the Intel CPU wasn’t too far away from the Ryzen 7 3700X once it was overclocked, and came close to matching the Core i7-9700K too.

It also gained a massive 1,000 points over the Core i5-9600K here at 3,859 compared to 2,875, which shows the potential benefits of Hyper-Threading. In both Handbrake and the multi-threaded Cinebench test, the Core i5-10600K was also slightly quicker than the older Core i7-8700K.

Where the Core i5-10600K really excels is games. It matched the Core i9-10900K in Metro Exodus at 1080p and added 5 per cent to the stock speed 99th percentile minimum frame rate of the Ryzen 7 3700X. Overclocking yielded little here, but it really helped in Far Cry New Dawn, where the 99th percentile minimum frame rate rose from 90fps to 96fps. This compares to a peak of 87fps with the Ryzen 7 3700X, which was even slower at stock speed.

Meanwhile, power consumption peaked at 157W at stock speed and just under 200W when overclocked in our test system, which was actually the same as the stock speed draw from our Ryzen 5 3600X system. The Core i5-10600K is relatively powerful and easy to cool compared with Intel’s 8-core and 10-core models.

The Core i5-10600K is a clear demonstration that Intel should have added Hyper-Threading to its cheaper CPUs years ago – it would have made the likes of the Core i5-9600K far more attractive outside of gaming. The massive boost to various multi-threaded scores compared with the Core i5-9600K means that the latest Core i5 is a great all-rounder. It’s far more potent in multithreaded tasks than its predecessor, and it keeps up with the monstrous Core i9-10900K in games too, edging out noticeable leads over all AMD CPUs.

It’s at its best when overclocked, though, so you’ll need to factor in a reasonable CPU cooler as well as a Z490 motherboard. While some had niggles overclocking the Core i9-10900K, the Core i5-10600K will be a far easier customer when it comes to tweaking voltages and frequencies.

Ultimately, the Core i5-10600K is a great CPU if you’re building a new reasonably priced gaming rig, and you want the fastest frame rates but can’t afford the Core i9. It also packs a punch in multi-threaded performance, but if the latter makes up most of your workload, the Ryzen 7 3700X remains a better buy.

Great performance in games and decent multi-threaded grunt – the Core i5 K series is finally delivering on expectations again.