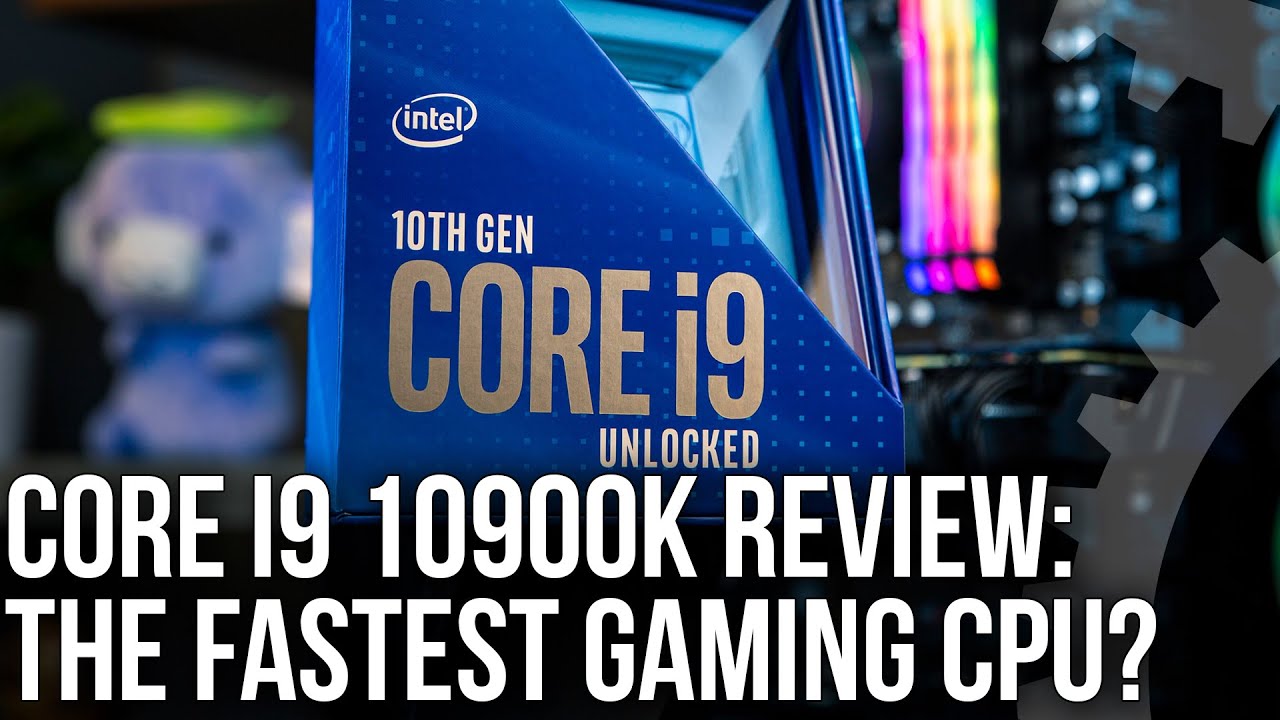 Read the detailed intel core i9 10900K review, the fastest gaming processor. A couple of years ago, we were expecting Intel’s 10th-generation CPUs to sport a 10nm manufacturing process, but we’re still sat at 14nm and using the ageing Skylake-based architecture with minimal revisions.

Core counts have improved by a fraction of what AMD has managed too, rising from four to ten cores with the stack-topping Core i9-10900K we’re reviewing here, whereas AMD offers up to 16 cores on its mainstream desktop platform.

However, while we’re only seeing a shift from eight to ten cores with the flagship CPUs compared with the last generation, Intel has also made the interesting move of adding Hyper-Threading to its entire product stack.

Previously, CPUs such as the Core i5-9400F and Core i5-9600K were massively held back in multi-threaded performance thanks to a lack of available threads compared with AMD chips, but the new Core i5 CPUs now have much more grunt for content creation and multi-threaded games, in addition to the excellent gaming performance that comes from fast clock speeds.

What’s more, the Core i9-10900K’s price is similar to that of the Core i9-9900K when it launched 18 months ago, but with two extra cores and higher frequencies.

With ten cores and 20 threads, the Core i9-10900K offers two more cores and four more threads than the Core i9-9900K, and the amount of L2 cache has also gone up accordingly.

Thanks to Intel’s Thermal Velocity Boost, which increases CPU frequency according to thermals and motherboard capabilities, the Core i9-10900K can also hit 5.3GHz across up to two cores at the same time, which is 600MHz higher than the top boost clock of any current AMD CPU.

This was a bit of an issue at launch, though, as motherboard manufacturers struggled to hit this frequency at all, and even when the chip did boost, just having a couple of low-key programs open in the background would see the frequency top out at 5.1 or 5.2GHz.

Intel has at least attempted to solve the issue of heat, which could be a real issue with the Core i9-9900K, especially when overclocking. The Core i9-10900K sports some tweaks here compared with its forebear, with a die that’s 0.3mm thinner than its predecessor, but a heatspreader that’s thicker, resulting in a CPU that maintains compatibility with older LGA115xcompatible CPU coolers.

The die is less thermally conductive than the heatspreader, so it makes sense to keep it as thin as possible, while the heatspreader is made from nickel-plated copper, making for an excellent heat conductor.

This arrangement, Intel hopes, will allow the CPU to scale further with more cooling power, so better cooling may well yield more overclocking headroom. We’ll be investigating this in a future issue.

When overclocking the Core i9-10900K, we managed to get our system to boot at 5.2GHz with a 1.35V vcore, but this failed our stress test. In the end, we reined in the clock speed to 5.1GHz using a vcore of 1.3V, where temperatures sat in the low 80s (°C) with our liquid-cooling system, compared to 10-15°C lower at stock speed.

This highlights just how much Intel is pushing the limits, as usually we can match Intel’s stock speed peak boost frequency with an all-core overclock quite easily, but there’s very little overclocking headroom here.

In our RealBench tests, the Ryzen 9 3900X was faster than the Core i9-10900K, beating the Intel CPU everywhere except our heavy multi-tasking test. However, despite a 2-core deficit, the Intel CPU held its own and was never far behind, with its system score sitting just 12,000 points adrift.

The extra clock speed also saw the Intel chip top the single-threaded Cinebench R20 graph with a score of 532. Once overclocked, that score fell by 11 points thanks to our overclocking dipping below the stock speed boost frequency.

AMD still has an advantage in the multi-threaded Cinebench test with the Ryzen 9 3900X, but the Ryzen 7 3800X came a very distant third place here, with overclocking doing little to change the situation.

Games are clearly still Intel’s domain, although a lot of the benefits depend on your settings and setup. Even without a monstrous RTX 2080 Ti at the helm, we still saw much better performance in Far Cry New Dawn from the Core i9-10900K than with any AMD CPU at 1080p at ultra settings, and the game still prefers CPUs without Hyper-Threading, giving the Core i7-9700K the lead.

Interestingly, the cheaper Core i5-10600K was never far behind here either. Overclocking helped the AMD CPUs in this test, but ultimately, you’ll need a far more GPU-limited situation than our RTX 2070 Super to see a closer gap between these CPUs in this game at these settings.

In our more GPU-limited Metro Exodus test, the differences in percentage terms persisted, with the Core i9-10900K’s 43fps 99th percentile minimum frame rate being 5 per cent higher than the Ryzen 9 3900X’s result, and 15 per cent higher once overclocked.

Meanwhile, power consumption was high, but not enough to warrant buying a new power supply, peaking at 300W at stock speed for our Core i9-10900K test system, and 349W overclocked.

However, if gaming is your top priority, you can get very similar performance from the new Core i5-10600K, which also offers AMD-beating gaming performance and was a match for AMD’s 6-core and 8-core CPUs in many multi-threaded tests.

If you want the absolute fastest gaming CPU, along with decent multi-threading performance, the Core i9-10900K is at the top of its league, but if funds are limited and games are your top priority, you’d be much better off buying a cheaper CPU and a faster graphics card instead.