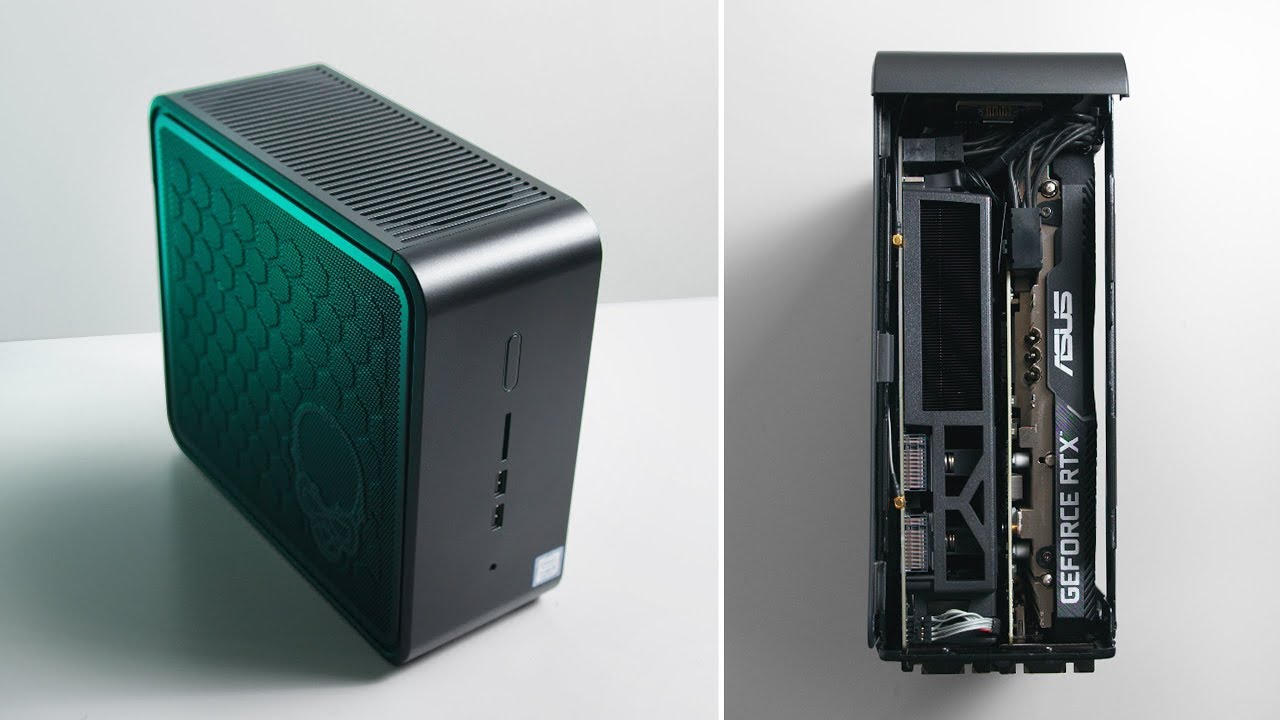 In 2020 the stereotypical gaming PC is still a large black box, probably adorned with some form or RGB lighting, powerful AiO cooling and multiple fans. ITX has been with us for many years, and it has developed a loyal following, but for some reason, the words gaming, subtle and discreet rarely go together.

That’s what makes a device like Intel’s NUC 9 Extreme appealing. It’s a tiny high performance gaming machine that completely rejects any form of ostentatious theme that many gaming products too often embrace.

NUCs, or Next Unit of Computing machines are not new. Applications such as digital signage, office use or media streaming are naturally fitting applications. Gaming NUCs also exist, with the likes of the Zotac Magnus or MSI Trident offering a similar small form factor gaming experience.

However, not many pack the specifications of the Intel NUC 9 Extreme into a chassis that’s just 5L in volume. In fact, only genuinely high end gaming PCs are capable of outperforming it, no matter their size.

Packing it all in

The Intel NUC 9 Extreme comes as a barebone kit. Open it up though and you’ll find something quite new, with major system components being located on a PCIe daughter board called the Compute Element. This creates some intriguing upgrade possibilities should Intel continue to invest resources into the concept.

Our machine came with the highest spec I9-9980HK option. It’s an 8-core/16-thread laptop processor that can boost as high as 5.0GHz. With its 45W TDP, it’s a great blend of performance and optimised power use.

Additionally it’s got WiFi 6 on board. Nice! There are an additional two USB ports around the front along with an SD card reader. Overall it has an excellent set of I/O options.

The user needs to add their choice of 8-inch dual slot graphics card, SO-DIMM DDR4 memory, storage and operating system. There are three M.2 slots, two of which can accept Optane drives.

Intel provided us with a fully kitted out sample of its NUC 9 Extreme which included an Asus RTX 2070 Mini 8GB and 2×8 GB of Kingston DDR4-2666. The supplied storage was top shelf, with a 380GB Optane 905P being one of the fastest drives on the market.

It was joined by a 1TB Kingston KC2000 meaning there was plenty of room for all of our standard applications plus several space hogging AAA games. These are not cheap components though, and together they add a lot more expense on to the base 9980HK equipped machine, which is priced at $2,399.

Playing with the big boys

When it comes to performance, the NUC 9 Extreme actually performs beyond our expectations. Though of course gaming performance is defined by the capabilities of your graphics card.

In Metro: Exodus, the 2070 equipped NUC held above 60 FPS at 1080P with the Ultra preset. Make no mistake, that’s a very demanding test. Tom Clancy’s Ghost Recon Wildlands is another brutal test at the ultra preset, with the NUC 9 Extreme resulting in a 59.5 FPS average.

If it can run these at 60 FPS at 1080p, then we’re confident in saying 1080p at maximum setting will be fine, with most less demanding games playable at 1440p and 4K too.

CPU based tasks performed admirably, with lightly threaded loads well suited to the Turbo characteristics of the i9-9990HK. In fact it’s able to match a desktop i9-9900K in some instances thanks to that high boost clock. Heavy loads tend to throttle lower due to power restraints and unfortunately, a lack of cooling capability.

The main weakness of the NUC 9 Extreme is its cooling. Despite being equipped with a laptop class processor, a heavy all core load causes temperatures to climb quickly into the 90’s which leads to the CPU lowering its clocks back to a laptop friendlier 3.3GHz, a 65W load and a more acceptable mid 70’s temperature.

For short duration all core load, the gaming CPU will hold above 4.0GHz on all cores, and consume around 90W of power. Maximum system power draw under full CPU load was 154W at the wall.

The compact size of the unit means there’s no getting around the requirement for small fans, which tend to move up and down in speed. They become quite noticeable, but not truly loud.

This combination of performance throttling and fan ramping leads us to conclude that Intel needs to improve the cooling solutions of future gaming NUC products.

The NUC 9 Extreme is a fantastic concept. We like the idea of its upgradeability, however, a properly configured Mini-ITX system can also be upgraded, and with more ease. There’s also the cost. Intel weren’t able to provide a total cost for our machine as equipped at the time of writing,

but with a $2,399 base cost, plus the additional components including an RTX 2070 and an expensive and overkill 380GB Optane drive, we think we’re looking at up to $4,000. That’s a lot of money to build a very capable gaming PC with, albeit not one that’s 5L in volume!

The idea of the upgradeable laptop Element opens up some interesting future upgrade possibilities, assuming Intel continues to invest in it. We really love the idea of a fast, compact and discrete gaming PC.

Consoles gamers are used to small living room friendly machines, so it’s only natural that there should be a market for similar PCs (that are much faster!) Of course there are other NUC type gaming PCs but not like the NUC 9 Extreme.

While the concept is interesting, there are some hurdles. There’s no escaping the noise or fan ramping concerns we have, though if you’re using headphones it won’t be a problem.

We think Intel is on to something here, but for now it seems like more of a development concept undergoing a market trial. If the Compute Element concept takes hold, and future NUCs can tweak the design a little (perhaps with a custom AIO solution?), then apart from the pricing gulf, there’s nothing stopping Intel NUC’s from taking a place in living rooms where the console remains dominant.

The NUC 9 Extreme is a fantastic concept but its sky high price and under par cooling leave us underwhelmed.