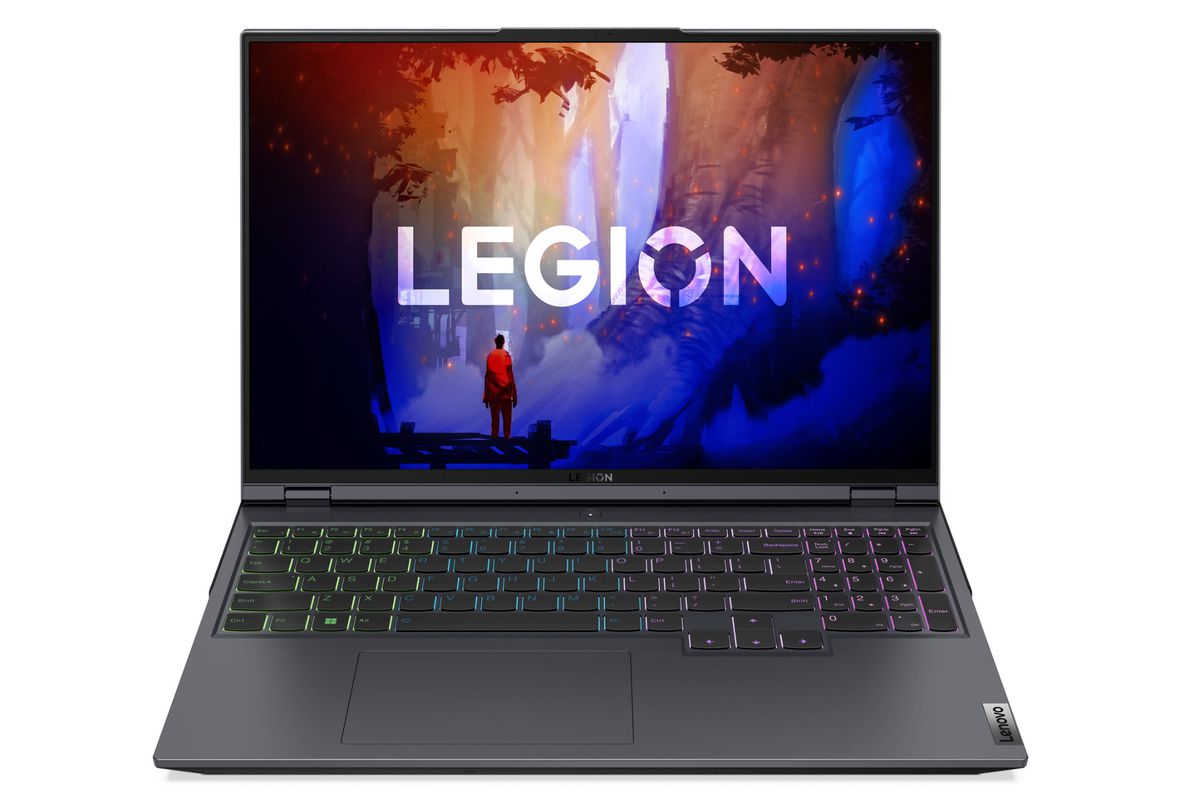 Lenovo’s Legion 5 Pro is the upgraded version of our Elite-listed budget gaming laptop, so we’ve got high hopes for this mid-range machine. It gets off to a good start with its screen, which has an intriguing 16:10 aspect ratio. This gives you more vertical space than a 16:9 screen and its 16in diagonal also contributes to more immersive gameplay than a 15.6in display.

The taller aspect ratio makes it easier to browse the web and view documents too, and it has a crisp 2,560 x 1,600 resolution as well. The screen pairs this ambitious specification with great quality – the panel renders 95.9 per cent of the sRGB gamut with a delta E of 1.28 and a color temperature of 6,244K, so you get a broad swathe of accurate colors, and the good contrast ratio of 1275:1 serves up decent depth and nuance.

The peak brightness level of 546cd/m2 is also vast – you’ll have to turn it down indoors, but it does mean that the Legion remains usable in all lighting situations. This is an excellent display, and it also supports G-Sync at a 165Hz refresh rate – you’ll only want to look further afield if you want a 4K panel or a 240Hz refresh rate.

Meanwhile, connection options include dual-band Wi-Fi 6, Bluetooth 5.1 and Gigabit Ethernet, and Lenovo has done a good job with the port selection. The Legion 5 Pro has four USB 3.2 Gen 1 connections and two USB 3.2 Gen 2 USB Type-C ports that handle DisplayPort. One of those full-sized USB connections is always on, for device charging, while one of the USB Type-C ports also offers power delivery.

The Legion also has an HDMI 2.1 output and a webcam privacy shutter, and most of the ports are around the back to keep your desk tidy. The webcam doesn’t support Windows Hello, though, and while the speakers are usable for games, they have a muddy mid-range output. You don’t get a card reader either.

Move to the gaming keyboard and you’ll find concave keys with quiet, fast actuation that’s good for mainstream gaming, Photographers, and the sensible layout includes a numberpad. There’s no RGB LED backlight, though, and the action is a tad soft – keen gamers will prefer a crisper experience. The trackpad disappoints too – it’s positioned on the left of the laptop, so your wrist can easily catch it during gameplay.

Lenovo’s Pro machine looks the part, though, with a sleek black finish used on the external aluminium panels and plastic interior. Build quality is good, although be aware that the Lenovo weighs 2.54kg and has an 870g power brick, so you’ll notice it in your bag.

When tested at our conventional 1,920 x 1,080 resolution, the high-end RTX 3070 delivered 99th percentile minimums of 48fps and 45fps in Assassin’s Creed Valhalla and Cyberpunk 2077. Those results are better than almost every laptop we evaluated in our recent Labs test – only Lenovo’s own Legion 5 offered comparable pace.

That’s a good start, and the Lenovo’s solid performance continued at 16:10 resolutions: its 99th percentile results were only at 1,920 x 1,200. It starts to struggle when you run demanding games at the screen’s 2,560 x 1,600 resolution, but it can still handle undemanding games fine, racking up an average of 152fps in Doom Eternal. However, if you want to play tough titles at the Lenovo’s native resolution then you’ll need to reduce your settings.

Not surprisingly, the Ryzen 7 5800H is great and still better than any current equivalent Intel chip – it has ample power for mainstream content creation and multi-tasking, as well as single-threaded performance. The Lenovo’s overall benchmark score of 204,593 is a mid-range result for a under 1000 laptop with this chip because the gaming CPU never quite attained its theoretical peak speeds, but performance isn’t seriously hindered.

The Legion 5 Pro produces some noticeable fan noise when it’s working, though, being marginally louder than many other RTX 3070 laptops. The noise isn’t ruinously irritating, and the exterior is never hot, but the Legion isn’t on the subtle end of the scale. Happily, the machine’s Quiet mode is very hushed, but that option also has a corresponding drop in performance.

Don’t expect much from the battery either. During a games test, the Lenovo only lasted for one hour and twenty minutes, and when gaming, the CPU is reined in to 90W. The Lenovo also only lasted three hours when running work tasks. The laptop has a hybrid mode that uses the AMD CPU’s integrated graphics to extend battery life, but that only added an hour of longevity to the work test.

This won’t be the last gaming laptop to have poor battery life, though, and the Lenovo impresses in plenty of other departments. The 16:10, high-resolution screen has fantastic quality, the components are fast, and the chassis is robust and well connected. Its fans can get loud and the trackpad is disappointing, but those issues aren’t deal breakers or unique to this machine. There’s an awful lotto like on this $1500 laptop, from the powerful components to the large, impressive display, especially at this price.

A cracking display meets powerful components in an impressive machine for a reasonable price.