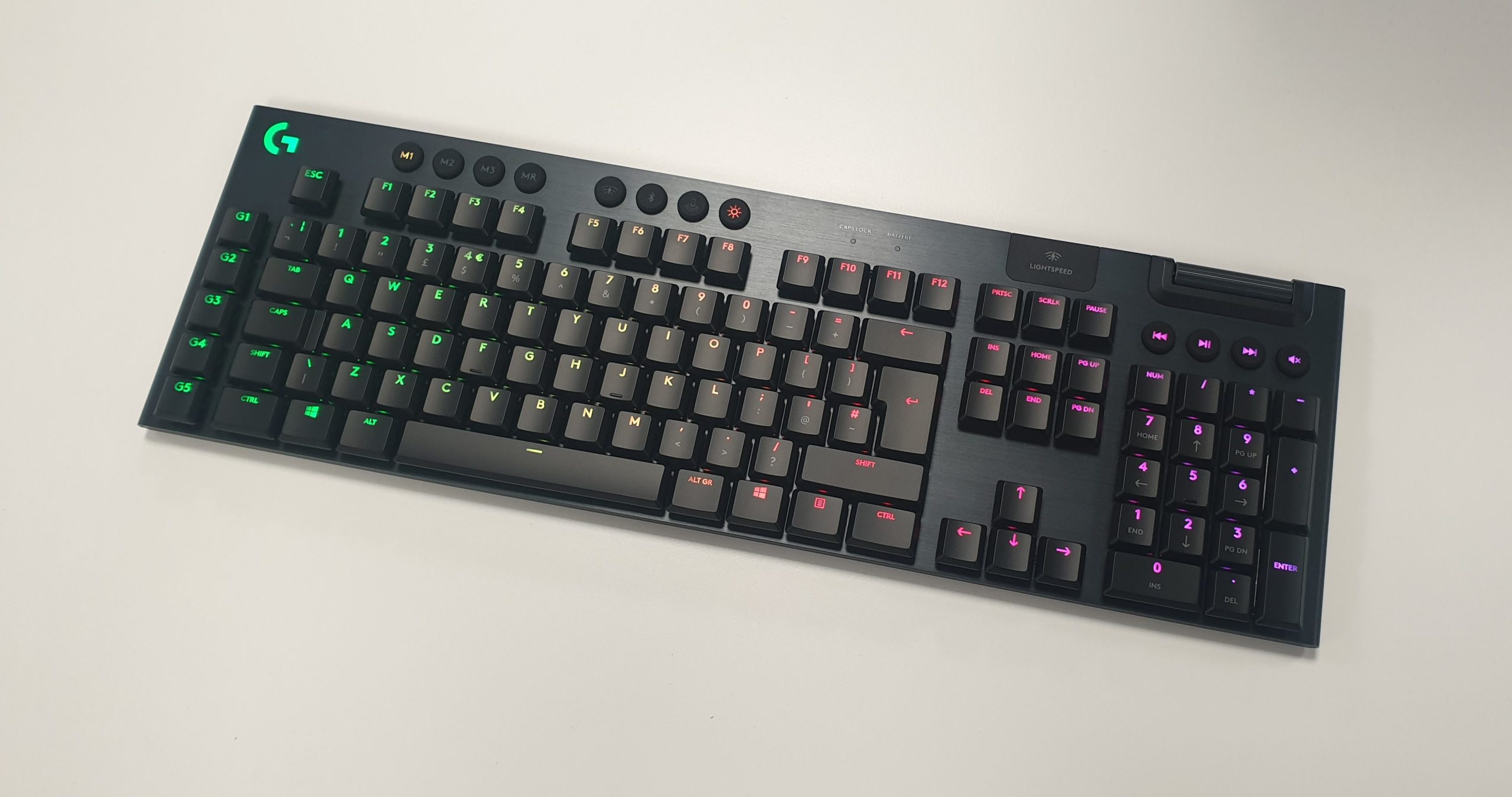 Read our review on Logitech G915 TKL Wireless Gaming Keyboard. Unrivaled wireless design with gaming-ready low-profile switches. For some,less is more when it comes to their gaming or work space. Less clutter, fewer cables means more space on your desk for moving your mouse or having a snack.

The Logitech G915 TKL wireless gaming keyboard frees up space in multiple ways, including a tenkeyless design that saves space by dropping the numpad and G macro keys. It also brings an ultra-slim build and the option to connect via Bluetooth or a wireless USB Type-A dongle.

The G915 TKL is a near replica of the full-sized G915 Lightspeed. That means it embodies the same svelte, classic and mature tone, with a layout thoughtfully designed for the functionality gamers need.

The first thing you’ll notice is that the G915 TKL, doesn’t have a numpad or the programmable and side flanked G macro keys that the full-sized version has. But at 368 x 150 x 22mm, the G915 TKL will save you horizontal desk space. You still get three easily accessible profiles stored in the keyboard’s memory and the ability to do on the fly macro recording (you can do it via software too), but these are secondary functions of the F1 – F4 keys instead of dedicated soft buttons, like on the G915 Lightspeed.

A lot of the premium features on the full-sized version appear on the tenkeyless keyboard, including buttery soft media keys and a ribbed, never-ending volume wheel that glides like it’s on ice. Part of what you’re paying for is the G915 TKL’s durable, polished build. In an ultrathin, but dense, frame, an aircraft-grade aluminium alloy top plate sits atop a steel-reinforced plastic base that’s subtly textured.

Logitech’s LightSync RGB pops on the brushed metal finish. Handily, you get dongle storage on the back, as well as two sets of flip out feet for elevating the keyboard either eight degrees or four degrees. The G915 TKL may very well be the most expensive peripheral to hit your gaming den, but it’ll certainly look the part too.

The G915 TKL comes with Logitech’s low profile GL mechanical switches, either tactile, clicky or linear ones (that same options available with the full-sized version). According to Logitech, its tactile GL switches are best for competitive and first-person shooter gaming, while the linear ones are great for MMO and action games.

After hours using the G915 TKL, gaming or otherwise, I never experienced a dropout with the wireless dongle, even with my PC also running dongles for my gaming headset and mouse.

The keyboard uses Logitech’s proprietary Lightspeed wireless dongle technology that’s supposed to offer a “pro-grade” wireless connection. The G915 TKL charges over the included Micro USB to USB Type-A cable, and Logitech claims it can go from 0-100% battery in under four hours and last 40 hours on a charge.

Whether you’re looking for a keyboard that can travel to LAN parties, to work or just from one room or PC to another, the Logitech G915 TKL is as good as it gets. It’s easily swappable Bluetooth or wireless dongle connections make it fit for use with multiple PCs, and its tenkeyless form trims down an already slender build even more. With looks, reliability and functionality, the G915 TKL is the ultimate small-form-factor wireless gaming keyboard.

With a slim but sturdy, portable frame and the option to easily switch from PC to PC, it’s the premium wireless tenkeyless for mechanical enthusiasts who can afford it.