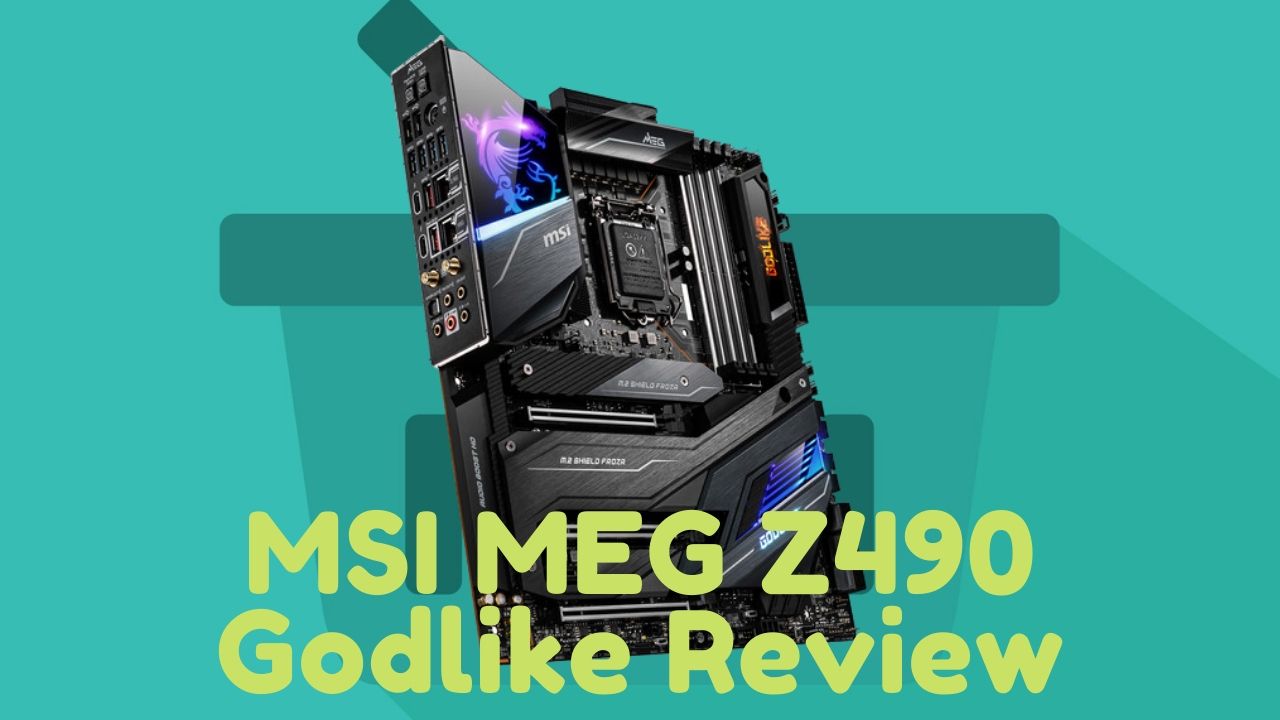 When you consider that most TRX40 chipset motherboards will leave you with change from $500, spending nearly $300 more to own a mainstream desktop motherboard for CPUs with no more than 10-core CPUs might seem a little foolish.

However, every motherboard manufacturer has such halo products, and people do actually buy them. The MEG Z490 Godlike is MSI’s topflight model and it costs a whopping under $1000 inc VAT.

One reason for the high price is the power circuitry. There are 18 power stages, 16 of which are rated at 90A and feed the CPU. On top of the power system is a large finned heatsink array, with the top and left portions connected with a heatpipe to spread the heat.

There’s active cooling here too, with a pair of tiny fans embedded in the I/O shroud. There’s a heatsink around the back of the VRMs as well, dispersing heat from the underside. It works too – the VRMs never topped 60°C in our test, even when the CPU was overclocked.

You get the usual count of six SATA 6Gbps ports, which is maybe a little disappointing if you have a bunch of hard disks to transplant, but MSI has focused more on NVMe storage, with a total of five ports. Three of them are on the PCB, but another two are on an M.2 Xpander card, which again offers active cooling.

A large single-piece heatsink hides two of the ports on the main PCB, and you’ll need to remove your graphics card to access them as well.

The top M.2 heatsink is easier to access, and sat away from our graphics card’s exhaust fan, so we used it for our thermal testing. It kept our Samsung 960 Evo M.2 SSD at a chilly 46°C compared to 55°C without it, but the M.2 Xpander card kept the SSD below 40°C for the entire test. The M.2 speeds sat at 3,326MB/sec and 1,853MB/sec respectively, which is in line with other Z490 motherboards.

If you’re looking to upgrade from Gigabit networking, the MEG Z490 Godlike not only sports the usual 2.5 Gigabit port included with all its Z490 boards, but also a 10 Gigabit Aquantia controller. There’s 802.11ax Wi-Fi as well, with a large desktop aerial in the box, so it’s top marks for networking support here.

We were initially stumped about the lack of power and reset buttons on the PCB, given the board’s calibre, but they’re actually hidden on the PCH heatsink in little tabs. As you’d expect, you get a clear-CMOS button, LED POST code display and a massive count of ten fan headers.

There are two thermal probe headers too, which can be tied to the fan control suite in the EFI and used to control fans, which is useful for water-cooling systems using coolant temperature probes. The EFI itself is very well laid-out, with the vast majority of overclocking settings on the same page, plus it looks clean and feels snappy.

Meanwhile, the I/O panel is suitably rammed with ports. You get a pair of USB 3.1 Type-C Thunderbolt 3-compatible ports, eight Type-A USB ports (including four USB 3 and two USB 3.1) as well as a USB BIOS Flashback button.

The layout is aided by the stretch to E-ATX dimensions, but the PCB is completely packed thanks to the addition of a dynamic dashboard – an OLED screen that can display custom graphics or presets, such as CPU temperature or the POST code display.

The massive RGB lighting-equipped M.2 heatsink and I/O shroud look fantastic, although this paraphernalia also makes one or two of the fan headers tricky to access. You’re sorted for lighting though.

Even if you need more illumination, there are numerous 3-pin and 4-pin RGB LED connectors, plus a 3-pin connector for Corsair’s RGB controllers and components.

At stock speed, the MEG Z490 Godlike posted the highest image editing score of any Z490 board we’ve tested at 64,528, as well as the highest video encoding score, which was nearly 20,000 points higher than the next best result.

It slipped a little in our multi-tasking test, but overall it was the clear winner at stock speed. This wasn’t repeated in Cinebench, though, with the best results here going to other boards.

Meanwhile, Far Cry New Dawn saw a minimum 99th percentile frame rate of 97fps, which is average, with this figure increasing to 103fps once overclocked. Audio performance was superb, though, with a dynamic range of 112.6dBA and noise level of -111.7 dBA.

When overclocking, we managed to hit 5.1GHz, by simply inputting a 1.3V vcore and 51x multiplier, which was far more straightforward than the Asus boards we reviewed this month.

The MSI MEG Z490 Godlike has lashings of the latest technology, and more than enough power and cooling to handle Intel’s latest CPUs. There’s huge scope for using it at the heart of a monster 10-core overclocked water-cooled system, and that extends to areas such as NVMe storage and extreme overclocking too.

If money were no object, we’d already have ordered one, but the reality is that only a few people will be able to disregard that extreme price tag. If you have the money, then go for it, but cheaper options overclock just as well and only lack some of its features.

A monster motherboard that ticks nearly every box, but sadly money doesn’t grow on trees.