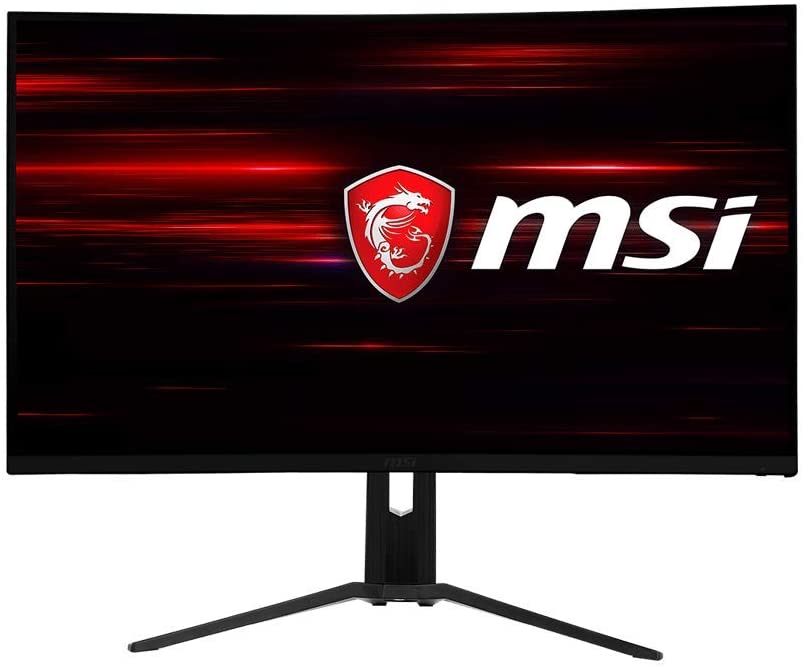 MSI Optix MAG322CQR 32″ is a great 32in curved monitor for gamers who want size but are limited to a budget under $500.

Just as gaming laptops are muscling their way into professional work-spaces – take a look at our Labs this month to discover how viciously the lines are becoming blurred – so gaming monitors are starting to look and sound similar to their professional stablemates.

This 31in screen has much in common with the curved Philips Brilliance P series monitors, right down to the built-in USB hub, USB-C connection and generous height adjustment.

As an added bonus, VA is also great for gaming: the technology has a naturally rapid response time, and MSI doubles down on this to offer from grey-to-grey. Add a measured contrast ratio of over 3,000:1 and you have all the key ingredients for that sought-after “immersive” gaming experience.

Even more so if you use an AMD graphics card, as this screen supports AMD FreeSync Premium. Let’s hope it’s a fast card too, as the screen’s maximum refresh rate is a smooth 165Hz.

MSI offers visual bling to hammer home its gaming advantage, with an array of RGB LEDs on the rear of the panel, but its most obvious bias towards gaming becomes clear when you open up its boy-racer red and black OSD. Press the rear-mounted joystick and the first options you’ll see are four gaming modes: FPS, Racing, RTS and RPG.

For example, in Racing mode, MSI increases the saturation and sets image enhancement to its peak – it claims this makes sunlight more realistic, “making players feel like they are actually driving the car”. I remain unconvinced by this claim.

Press downward on the joystick and you’ll find what MSI calls “Screen Assistance” and what others may dub “cheating”, but essentially it’s a choice of crosshairs to appear in the middle of the screen.

Moving the joystick to the right lets you easily flick between the four input sources – two HDMI, one DisplayPort and USB-C – while moving it left reveals a choice of alarm timers.

These are just the default options. Head back into the main menu and you can program what each shortcut does (brightness, for instance) and take greater control of the image settings.

There are the obvious controls such as contrast and sharpness, but you may also wish to adjust the individual gain of red, green and blue. This compensates for the lack of color temperature presets, with Cool, Normal and Warm the only options.

Most importantly, though, this is a high-quality panel. Out of the blocks, in its default mode with no tweaks, it covers 98.9% of the sRGB gamut with a 123% volume, while its average Delta E was a pro-level 0.6.

The Optix MAG322CQR came close to the assumed target color temperature of 6500K – we measured 6458K – and the contrast ratio of 3,185:1 is impossible to criticize. It’s also consistently bright across the panel, with no dark or bright spots to worry about.

Tweaking a few settings increased its coverage of the Adobe RGB and DCI-P3 color gamut, with 81.4% and 91% coverage respectively. That’s a 3% to 5% improvement over the results in its default mode, but this isn’t a panel that I could recommend to designers because MSI doesn’t make any guarantees about coverage or accuracy.

Professionals are better off  with a screen such as the Asus ProArt Display PA278Q V opposite, where you can be confident that two monitors bought six months apart will have similar color characteristics.

My other caveat is that a 2,560 x 1,440 resolution on a 31.sin panel works out at 93dpi pixel density, falling short of our rule-of-thumb target of 110dpi for a desktop monitor sitting a couple of feet away from you.

It’s not that text looks fuzzy, just that the eye needs to work that much harder- so if your working day involves a lot of text then you’re better off with a 27in 1440P panel or a wider screen such as the Philips Brilliance 346P1. As such, the MSI Optix MAG322CQR isn’t quite ready for a mainstream rollout yet.

Where it excels is gaming, and, unlike many other large curved gaming monitors – including MSFs expensive but excellent MPG341CQR, its price is attractive. As long as gaming is going to be your primary use of this monitor, you should be very happy indeed.