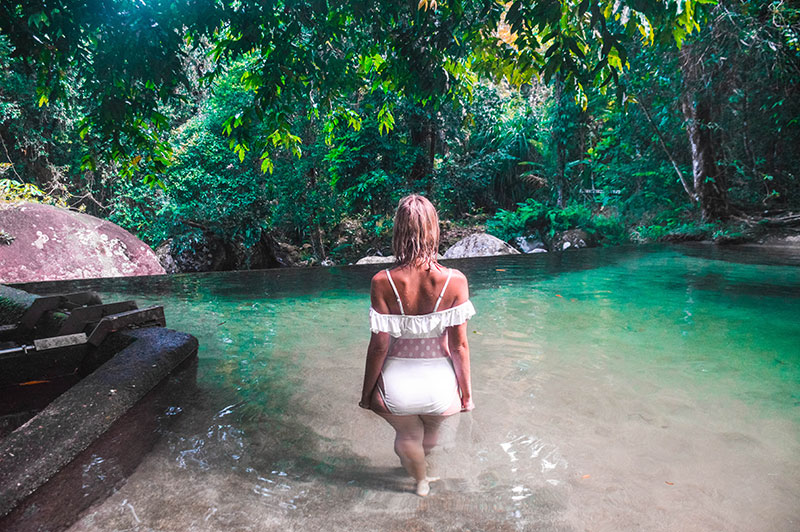 Here are 10 places you never knew existed in Far North Queensland to add to your next adventure.

Unexpected, unique and distinctly tropical, these ten top locations are so incredibly beautiful you’ll wonder why they don’t make headlines. There’s a chance even intrepid tropical explorers haven’t ticked them off yet. So if you’re headed to the tip of the Sunshine State this year, be sure to put them on your list.

West of Cairns at the top of the rugged Lamb Range, cool granite spa pools nestle among the eucalypts in the distant Dinden National Park. There are no crowds this far along the dusty track, which winds from Kuranda to Davies Creek Falls and upstream to these deeply tranquil pools. You can explore neighbouring Dinden and Davies Creek National Parks in an easy day trip out of Kuranda, strolling to viewpoints that teeter over the edge of 75m Davies Creek Falls, and float afterwards in chilly granite pools along the creek.

But it’s Dinden’s more remote rock pools that I love to soak in. Refreshingly clear, sandy waterholes, they are perfect for middle-of- theday swims (even in the midst of winter). Bring swimmers, a picnic and get set to unwind. If you love a leg stretch, my favourite hiking trail sets out from a nearby trailhead, cutting a steep path to Kahlpahlim Rock at the top of the Lamb Range and a surprising summit viewpoint over Cairns (12.2km/5 hours).

“Drive 21km west of Kuranda and take the signposted turn-off to Davies Creek and Dinden National Parks. The final 14km of dirt is suitable for 4WD vehicles only “

From the cool, rainforested flanks of Mount Finlay, Wallaby Creek thunders over Home Rule Falls, swirling into rock cauldrons and rushing away to fill deep, wide pools downstream. Where the creek finally slows and settles on the edge of Homerule Rainforest Lodge, travellers can float, paddle and snorkel in some of the clearest freshwater in the north.

Shady waterfront camps at Homerule suit all kinds of caravanners, and the enormous, free-range sites offer sublime views over the creek and quick, three-step access to the water. This is the perfect spot to untie the kayak or don your mask and snorkel to drift in the current beneath the shady rainforest canopy. When it’s time to warm up, tackle the 40-minute hike to multi-tiered Home Rule Falls and swim in the invigorating spa pools beneath the rugged rock face.

“Wallaby Creek is located in Rossville, 53km south of Cooktown via sealed roads. You can camp overnight at Homerule Rainforest Lodge (homerule.com.au) or the Lions Den Hotel. Time your trip to catch September’s Wallaby Creek Festival“

Shimmering like a jewel off the Cape Tribulation coastline, this barely-there sand cay is everything you’d imagine a tropical isle to be. Girthed by sublime coral gardens that lure in green sea turtles, reef sharks and a kaleidoscopic abundance of fish, it’s long been the image I conjure up when I think of the magical Great Barrier Reef. Bereft of trees, all the life this tiny sand cay supports lies under its opalescent waves where giant clams stud the sea gardens and clownfish colour the anemones.

There are bright, swaying feather stars, lime and tangerine corals, and a thousand Christmas tree worms light up the coral bombies. Undine Cay’s underwater wilds thankfully remain untarnished by dive pontoons and the carnival atmosphere of the more visited reef locations off Cairns. It’s pure and pristine and that’s why I’m more than a little bit smitten with this place, easily accessed on day trips out of Port Douglas that also stop at Mackay Reef.

On the endlessly scenic route that hugs the Coral Coast from Palm Cove to Port Douglas, the seaside sculptures stacked up at The Gatz stop traffic in its tracks. These stellar stone creations are utterly bewitching, created by a thousand travellers, tumbling at the mercy of the wind and waves, and ever-changing in the hands of some new, imaginative visitor.

No one knows how or when they first began, but the sea-smoothed stones the sea heaps up on the southern end of Wangetti Beach provide all the building material you’ll need to construct your own balancing marvel and snap off an Insta-shot or two. Wangetti Beach is also home to the tourist attraction that my friends and family always want to visit — Hartley’s Crocodile Adventures. Just to the north at Rex Lookout, you can watch the hang-gliders who dare to launch themselves into the abyss above Wangetti Beach.

“Follow the Captain Cook Highway north of Palm Cove and pull over when you spot the rock cairns at the southern end of Wangetti Beach. Park the caravan nearby at Ellis Beach where there’s a swimming pool, camp kitchen, laundry, barbecues and a general store.”

At the very end of the bitumen, 5km north of Cape Tribulation, the Bloomfield Track begins in earnest, luring 4WD travellers across Emmagen Creek on offroad adventures to Woobadda Creek, Bloomfield Falls, and beyond. Emmagen Creek is the spot that literally separates travellers, but whether you push north or not, there’s a rather invigorating reason to park the car and wander upstream alongside this crystalline creek to the tranquil, rainforested nudie pool that forest swimmers have visited for decades.

When we first stumbled upon this magical pool on a cycling trip to Cooktown, a tiny, hand-painted ‘clothing optional’ sign was all the encouragement we needed to strip off and throw ourselves in. It just wouldn’t do to swim fully clothed in such a spot, so this is the place to free your soul and dare to be bare.

It’s Australia’s longest network of high-altitude rainforest trails, yet so few people discover the Misty Mountains’ World Heritage-listed wilderness that it may well be our most secluded, too. What excites travellers who love to hike, are the 130km of Indigenous foot trails and centuries-old logging tracks that loop the misty foothills of the Cardwell Range. Hikes last from four hours to four days, and you can access the trails from Tully and Mena Creek on the coast, and Ravenshoe and Millaa Millaa on the Atherton Tablelands.

I love the challenging, two-day hike up the Djilgarrin Track to Walter’s Waterhole for its cool river crossings, cassowary sightings and a side-trip to striking Elizabeth Grant Falls that plunges 300m to the valley floor (31km return). The trails follow ancient pathways of the nomadic MaMu and Jirrbal people who made seasonal wanders between the mountains and the coast. There are bush camps en route but no facilities so arrive prepared.

“Misty Mountains has 130km of walking tracks to explore. The cool, dry winter months are best for hiking, to avoid the heat and the wet season’s march flies and leeches. Choose your trail and book camping permits”

If you’ve never heard of a Mabi forest, it might be because there’s so little of it left on the planet. Wongabel is one of the last; a slender patch of endangered forest that once covered all the Atherton Tablelands, supporting great number of similarly endangered Lumholtz’s tree-kangaroos, southern cassowaries and musky rat kangaroos. Wandering here you are far more likely to spot wild things than other walkers, so keep your neck craned for the tree-kangaroos known as ‘Mabi’, who lend their name to the forest too.

They are best spotted at dusk or dawn, and, if you’re lucky and quiet, you might encounter one as it drops suddenly to the forest floor and climbs away just as swiftly before turning back to peer down at you, its exceptionally long tail hanging free. At Wongabel, the easy Heritage Walk loops 2.5km through the forest and will soothe you for about an hour.

“You’ll find Wongabel Forest signposted 8km south of Atherton on the Kennedy Highway, 4km past Hasties Swamp on the road to Herberton. You can free camp at nearby Archer Creek Rest Area, 18km from Ravenshoe. Don’t miss Malanda’s Tree Roo Awareness Week (May) for feel-good fun and festivities.”

This is the place where zoologist Carl Lumholtz first spotted the tree-kangaroos that made him famous. Of course, the Indigenous guides who led him to them back in 1882 had known about them for eons, but Lumholtz got to lend his name to these fascinating half-bear, half-kangaroo-like creatures found only in Queensland’s far north. Abergowrie State Forest lies on the western side of the towering Cardwell range that parallels Hinchinbrook Island just offshore.

In this working forest where cassowaries and tree roos roam, campers park their rigs alongside Broadwater Creek and slide into deep, clear swimming holes, far from the noisy hubbub of crowded Bruce Highway rest areas. There are top facilities, low fees and a fantastic little boardwalk stroll that loops through rare, riparian rainforest to the majestic 200-year-old Broadwater fig. Wompoo pigeons, fairy wrens and spotted catbirds call early risers into the forest at dawn, and upstream, a creek side trail leads to the Overflow, a lovely sandy waterhole, studded with huge granite boulders.

On the long climb that switchbacks up the range from Gordonvale onto the Atherton Tablelands, few travellers stop to cool their heels at this top little locals’ swimming spot. It’s cool and clear and there’s plenty of shade for picnics, and when rain falls up on the Tablelands (which is often), there are neat rapids to paddle against in the shallows.

Lots of places along the mighty Mulgrave River invite swimmers to cool off, but this one is spacious with easy parking, and the friendly Mountain View Hotel just across the river does a top lunch served on its breezy, riverside deck. Like most waterways in the tropical far north, the Mulgrave River does occasionally tempt the odd estuary crocodile far upstream so obey warning signs and stick to the clear shallows if you think you might not be alone.

“Follow the Bruce Highway 20km south of Cairns to Gordonvale. Turn west onto the Gillies Highway and just before you cross the Mulgrave River, turn left onto the old road and park by the river. You can camp close by at Goldsborough Valley in Wooroonooran National Park”

A day’s drive west of Cairns, Chillagoe’s glittering labyrinth of caves lures intrepid travelers underground to shimmy and climb through tunnels sparkling with chandeliers and stalactites that trickle into shimmering rimstone pools. Chillagoe’s ranger-led cave tours are so rewarding that few travellers venture further afield to nearby Mungana Archways for equally bewitching wanders that are perfect for claustrophobia!

Here, a walking trail loops through a maze of collapsed rock known as a grike field, which really means that you get to poke your way into fern-filled grottos and slender cave openings without losing sight of the sky. Shine your torch into ever-narrowing chasms, find towering stalactites and stalagmites slowly working their way together, and shimmy into tight squeezes if you dare. I love to climb to a shady rock slab in the middle of the day to watch the sun illuminate Mungana’s flaring caves’ walls. The walk is just 160 metres return, but it’s so much fun you’ll need at least an hour.

“Mungana Archways is signposted off the Burke Developmental Road, 20km west of Chillagoe and is free to enter. Close by, a gallery of Indigenous rock art adorns Mungana’s picnic area.”