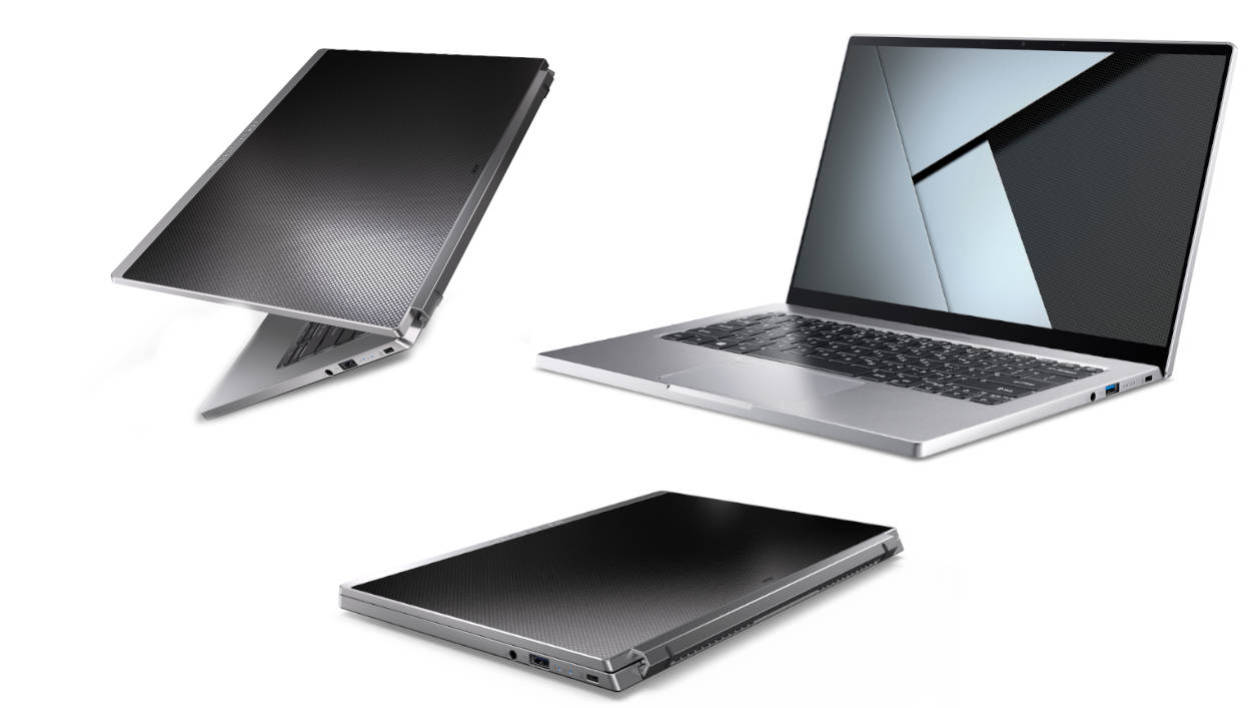 This is a laptop of firsts. It’s the first Porsche Design laptop we’ve reviewed, and the first machine that Porsche’s design wing has produced in partnership with Acer. It’s the first laptop we’ve seen with an 11th-generation Core i7 processor. And it’s also the first outing for Nvidia’s GeForce MX350 graphics.

However, what’s most unusual about this laptop is its look. A carbon fibre finish on the lid is striking enough to gain stolen glances from across the train aisle and across the boardroom, with a honeycomb effect that looks far better in the flesh than words can describe or photos show.

The rest of the design is more practical, with a magnesium alloy body that – a little unfortunately – resembles grey plastic from a distance. The fact that it’s metal is obvious once you’re hands on, with a sturdiness and coolness to the touch that emphasises the quality shown throughout the laptop.

Design isn’t all about looks, though, and Porsche Design has nailed portability. A 90% screen-to- body ratio contributes to a compact design, measuring only 209mm from front to back when closed. With an 18mm thickness and 1.2kg weight, this laptop is tailor-made for life on the road. It helps that battery life is equally strong, surviving 6hrs in our video-rundown test. Naturally, you can charge via the USB-C port, although a more mundane proprietary charger comes in the box.

Porsche Design plays it safe with the display, which is a high-quality 14m IPS touchscreen with a 1,980×1,020 resolution; at this price, I hoped for at least 2,560 x 1,440. A glossy, anti- reflective coating diffuses overhead lights effectively, and a peak brightness of just over 4oocd/m2means it can cope with every lighting condition other than direct sunlight.

A contrast ratio of 1,651:1 adds further punch, and it covers 99% of the sRGB color gamut with excellent accuracy: an average of 0.3 and maximum of 1.02 means no human eye will spot any issues. The screen isn’t designed for more adventurous color spaces such as Adobe RGB or DCI-P3, covering 70% of them both, but films still look impactful.

The quality extends to the keyboard, which is both quiet and pleasant to type on. There’s enough travel to make each keypress substantial, while the “feel” of the buttons is dampened so you don’t have the impression of typing on jelly. I have only one bone to pick and that’s the placement of the PgUp and PgDn keys right next to the cursors. Hitting the key you want involves precision worthy of Lewis Hamilton.

My bigger complaint regards the touchpad. The main surface is smooth and responsive, but when buying a premium laptop such as this I expect the click of mouse buttons (built into the bottom of the trackpad) to sound and feel classy; instead, you’re rewarded with an echo click more reminiscent of a Fiat Uno than a Porsche Boxster.

Perhaps this is one reason Porsche Design is pushing a bundle of the RS I7 with its three-piece travel set, which includes an elegant two-button mouse. This mouse carries through the laptop’s carbon fibre design, which covers the left-click button, and is light and compact enough to sling into a bag. To nitpick once more, however, there’s no off button, so it may accidentally activate your laptop during travel.

The other key element of the travel set is as curious as it is useful. Not the mesh fabric sleeve, which looks suitably professional and offers plenty of protection, but a magnetically attaching top that doubles up as a slim leather mouse mat. There’s even a separate leather travel bag for the mouse and charger, which again clips on to the carry case magnetically. It’s all very clever.

The real brains behind this operation is an 11th-generation Core i7 processor. While still based on a 10nm process, like the tenth-generation Core chips, a number of enhancements mean that these “Tiger Lake” processors can run all cores faster, and for longer, than their Comet Lake predecessors – and single-threaded performance has been hugely improved too.

For an instant comparison, the Porsche Design laptop scored 135 in our benchmarks compared to 100 for the HP EliteBook X360 – despite their processors having similar on-paper specifications. That’s an unprecedented jump. We saw a similar leap in Geekbench 5, from 4,121 in the multicore test to 5,773. And in Cinebench R23: from 3,488 to 5,322.

The same applies to single-core speed. The image-editing portion of benchmarks best illustrate this, with the Porsche Design taking 61 seconds to complete this task compared to 76 seconds for the HP. In Geekbench 5’s single-core test, the advantage was 1,536 against 1,215. And once more Cinebench R23 hammered home Tiger Lake’s speed, with a score of 1,492 versus 1,120. Wherever you look, the new chip is 30% to 40% faster than its predecessor.

Comparing Tiger Lake to AMD’s Ryzen 4000 series of processors tells a similarly positive, if more nuanced, story. In single-core tests, Intel holds a clear advantage. For instance, the HP EliteBook 845 powered by a Ryzen 7 4750U processor scored 1,128 in the single-core Geekbench 5, so around 20% slower than the Porsche Design. However, that AMD-powered EliteBook completed our photo-editing test in 59 seconds, which is two seconds quicker. What’s more, with eight cores and 16 threads to call upon, it scored 231 overall in our benchmarks and blasted to 6,279 in the multicore part of Geekbench 5.

As mentioned at the start, this is our first chance to test Nvidia’s GeForce MX350 graphics. The direct successor of the GeForce MX250, which we last saw in the Huawei MateBook 13, it has numbers in all the right places thanks to 640 shaders – compared to 384 for the MX250 and 448 for AMD’s Radeon RX Vega 7.

Nvidia claims the MX350 is 2.5X faster than the UHD 630 integrated graphics found in an Intel Core i7-io65G7, but in this incarnation Nvidia’s chip proved disappointing. In fact, in many tests it was slower than the MX25o-powered MateBook: this averaged 45fps in Metro: Last Light at 1080p, while the Porsche Book only scored 36fps. And where the MateBook managed a paltry in Metro Exodus, the Porsche spluttered to a mere 8sfps.

The MX350 was a modest sfps faster than the MX250 in GFXBench’s off screen Car Chase test, 83fps against 78fps, but even after checking and rechecking for driver updates – and resetting the PC, just in case there was a hidden software problem – the inescapable conclusion is that this implementation of the MX350 is currently below par. I hope (and expect) that it’s a temporary problem that will be solved via an update, but it’s still disappointing.

There is a crumb of comfort, however, and that’s the quality of the Intel Xe graphics. Indeed, these are so good that it’s questionable just how big a boost Nvidia’s MX350 will be once it starts working like it should. The graphs to the left should tell most of the story, but for the first point of evidence note the GFXBench Car Chase scores: a i43fps result is four times faster than the UHD 630 graphics found in previous mobile Core i7 processors, and almost double that of the GeForce MX250 -a discrete graphics processor, note.

I’m also impressed by its results in real games at 1080p. It’s true that Fi 2020 and Metro: Last Light aren’t the most demanding games, but results of 53fps and 59fps respectively show just how smooth you can expect gaming to be. That’s a clear 11fps and 17fps better than the Radeon graphics found in AMD’s Ryzen 4750 Pro processor, which I tested in the HP EliteBook 845 G7 last month.

Metro Exodus proved a stretch too far (i4fps), while Shadow of the TombRaider refused to run, but for the first time in many years, Intel’s mobile processors have taken the 3D speed lead from AMD.

While Intel’s newly discovered turn of pace is great news for the company, the nth-generation Core processors are hardly unique to the Porsche Book – and I’m struggling to find convincing reasons to spend this much money on a laptop that only has design to make it stand out.

There are plus points: the 1TB SSD isn’t just big but also fast, returning sequential read speeds of 2,2i3MB/sec and writes of i,958MB/sec. The single USB-C port is similarly speedy, supporting Thunderbolt 4, and both USB-A ports support the fastest USB 3.2 standard. Add Wi-Fi6, Bluetooth 5.1 and 16GB of RAM, and this machine ticks all the speed boxes. Porsche Design and Acer could have further justified the price if the discrete graphics were meatier, with a GeForce GTX1650 perhaps, and the laptop feels well- built enough to cope with the extra heat this produces. As it stands, though, the Porsche Design Acer Book RS I7 doesn’t have a big enough engine to win the premium ultraportable race.