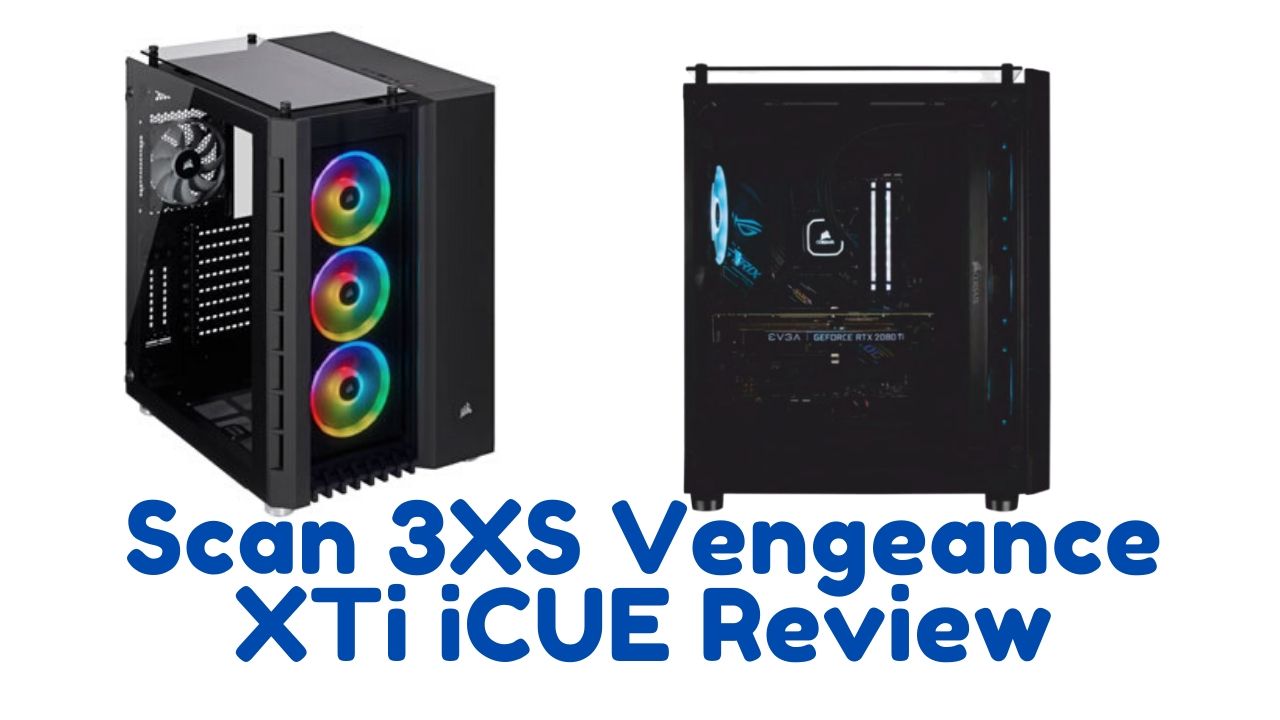 Scan’s 3XS Vengeance XTi iCUE is the first desktop we’ve seen with an Intel Comet Lake CPU inside, and the chip of choice here is the flagship Core i9-10900K. Intel’s latest Skylake revision is a 10-core chip with Hyper-Threading, giving it two more cores than the preceding i9-9900K.

The base clock now sits at 3.7GHz, and the chip can accelerate through varying turbo levels to deliver a potential peak single-core speed of 5.3GHz.

Scan’s machine comes with two performance modes – one that runs the chip at conventional speeds, and another that overclocks every core to 5GHz. The new CPU is paired with a GeForce RTX 2080 Ti GPU. It’s an EVGA Black Edition model with two hefty fans, RGB LEDs and an overclock – Scan has taken the stock-speed card and added 150MHz to the GPU clock and 200MHz to the memory frequency.

The specification is rounded out by 32GB of 3000MHz memory and a 2TB Samsung 970 Evo Plus SSD, giving you loads of high-speed solid state storage. However, the new CPUs don’t support PCI-E 4, giving AMD 3rd-gen Ryzen setups an advantage here.

It’s all plugged into an Asus ROG Strix Z490-F motherboard, which makes use of the latest chipset by supporting 2.5Gbps Ethernet, although there’s no Wi-Fi on this board, despite Z490 adding support for Wi-Fi 6. Elsewhere, the board has spare memory and M.2 sockets, attractive RGB LEDs and plenty of PCI-E slots, including SLI support. There’s decent S1220A SupremeFX audio, a Thunderbolt header and five USB 3.2 ports, alongside a Type-C connection. It’s a shame there’s no super-fast USB 3.2 Gen2x2 Type-C, though, and there are no on-board buttons or POST display either.

Scan’s high-end specification sits inside a huge Corsair Crystal 680X chassis. It measures 505mm tall and a hefty 344mm wide, with a weight of 11.5kg before any components are added. It’s wide because there’s no PSU shroud – instead, the Corsair RM850x power supply sits behind the motherboard. It’s a fully modular unit with 80 Plus Gold certification, which is great to see.

This design gives the rig a clean look, and Scan’s typically tidy building makes every component accessible. The three intake fans and single exhaust fan are synchronised in white lighting, and every RGB LED throughout the system shares that shade. The Corsair Hydro H150i cooler is large, but it’s radiator is installed at the front of the case, which keeps it out of the way. And, as ever, Scan’s warranty is great – a three year parts and labour deal, with a year of on site service included.

With its high single-core turbo clock speed, the Core i9 CPU beat AMD in our single-threaded image editing test, though, and it’s generally better in scenarios where single-threaded pace is prized. However, this is cold comfort when AMD succeeds elsewhere. Don’t expect much from Scan’s overclocked mode either – it only delivered minor improvements to our benchmarks, and was slower in some circumstances.

It’s better news for gamers. The Intel CPU and overclocked GPU helped the Scan to deliver superb results – this PC was often 3-5fps faster than systems with stock-speed RTX 2080 Ti cards paired with AMD CPUs, such as this month’s CyberPower system.

Switching to the Scan’s overclocking mode saw another frame or two added to gaming results, but the frame rate dropped slightly in some tests too. We’d be inclined to leave it at stock speed. Nevertheless, there’s huge gaming speed here.

Whether you’re playing 4K titles or handling graphically intensive productivity software, the Scan can cope. It never dropped below 52fps in our 4K normal game tests, and if you enable DLSS, you can even run Battlefield V with ray tracing on High without dropping below 56fps.

The SSD is fine as well, with decent read and write speeds of 3,508MB/sec and 3,256MB/sec. AMD again has an advantage here, though, as its latest platform supports PCI-E 4 SSDs that are around 1,000MB/sec quicker in sequential tests.

The Scan is an impressive thermal performer too. The CPU and GPU delta Ts of 65°C and 58°C are fine, and the Scan is quiet too – its low rumble is one of the most modest noises we’ve heard from a high-end PC for ages. In a lot of rooms, you just won’t notice it.

Intel’s new CPU is a great chip for gaming and single threaded applications, but this kind of multi-core monster is designed for tougher workloads – and this is where Comet Lake falls down compared with AMD. If that’s where your interests lie, then AMD’s chips are faster and often cheaper – and they’re not exactly far behind in games and single-threaded workloads either.

It’s a shame, because the Intel chip does have its strengths, and the rest of the rig is superb – it’s great in games, the component choices are solid and it’s built in a strong, good-looking chassis. You can get better multithreaded value from AMD-based machines at the moment, but if you want the fastest gaming rig around, this PC is certainly a contender if you can afford it.

Great gaming speed in a quiet, well-built machine with solid component choices. However, Intel’s new CPU can’t beat AMD across the board.