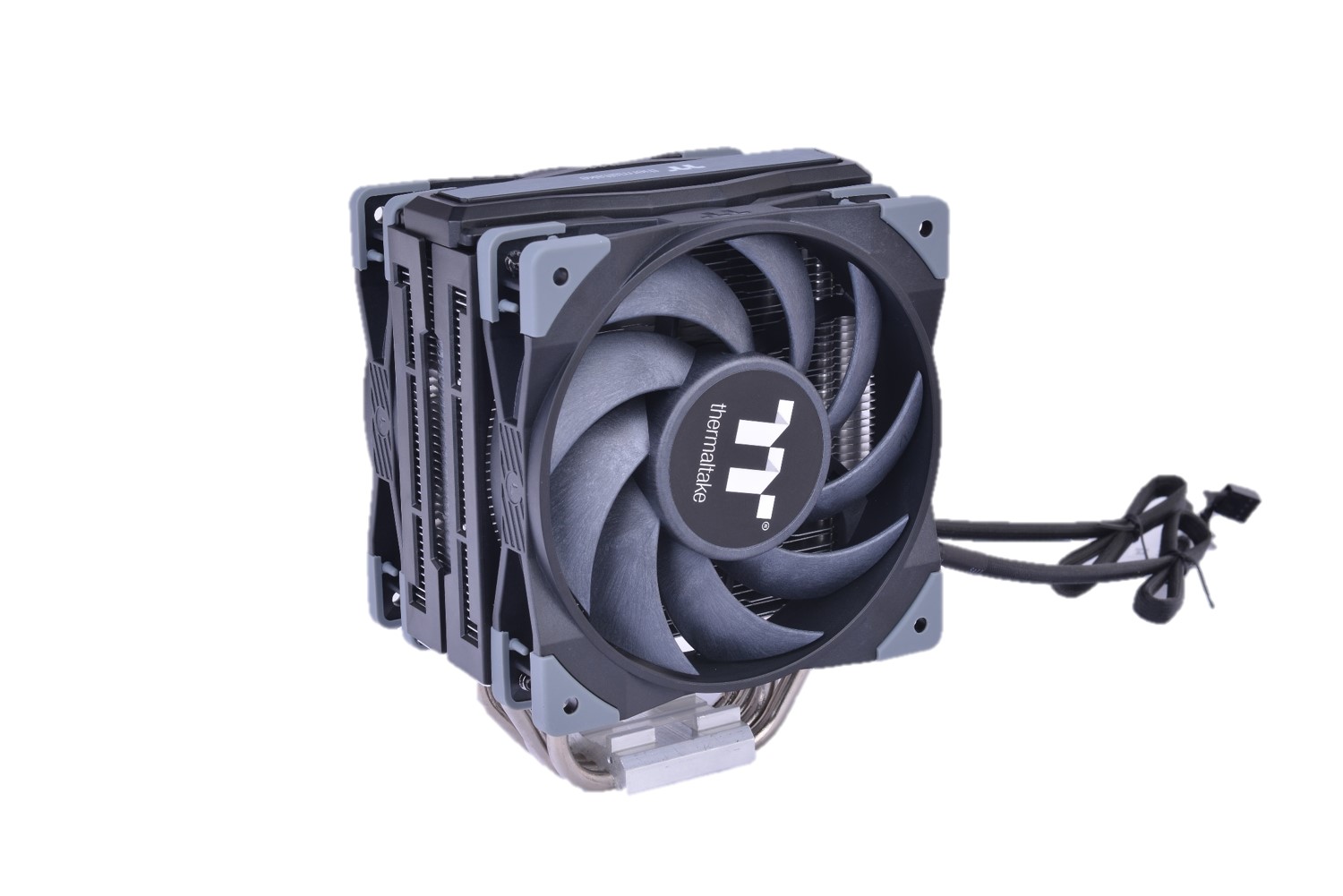 Even the cheapest all-in-one liquid coolers often can’t compete with air coolers when it comes to price, and if you only need to cool a low to mid-range CPU, a decent air cooler should do the job fine. With an asking price of under $50, Thermaltake’s new Toughair 310 isn’t the cheapest CPU air cooler we’ve seen, but this price is typical for a tower-shaped cooler with a 120mm fan.

That price buys you decent build quality as well. The Thermaltake’s heatsink is solid, well made and features an elegantly shaped, well-spaced stack of fins, and a plastic shroud sits on the top, rather than exposing the bare metal heatsink. It looks smart and continues to do so once the fan has been installed.

The fan has a unique and simple way of mounting on the heatsink as well – it secures to two plates with standard fan screws, and these plates then clip to the heatsink. It’s a more involved process than some air cooler designs we’ve seen, but once the plates are secured to the fan, installing and removing it takes seconds.

That’s just as well too, as you’ll need to remove the fan to get at the cooler’s mounting mechanism. Sadly, though, there’s no way to add a second fan in a push-pull configuration.

As the heatsink is so slim, there’s plenty of clearance for your memory next to the CPU socket, but its height sits at a fairly typical 160mm, so you won’t be able to squeeze this cooler into some height-limited cases. At full speed, the fan is fairly potent, running at 2,000rpm, but the wide-spaced fins on the heatsink won’t provide much resistance and lean towards improving performance at lower fan speeds.

Supports sit under a mounting plate on the CPU socket side, with our only complaint being that the thumb nuts that secure the plate to the supports were occasionally tricky to tighten fully.

Our AMD system with an overclocked Ryzen 7 5800X sat at a CPU delta T of 67°C with the Thermaltake cooler, which was a few degrees warmer than most of the 120mm AIO liquid coolers we tested, but it was noticeably quieter at full speed too. It even managed to beat the Corsair iCUE H60i RGB Pro XT at its quiet fan speed setting.

Our Core i9-12900K proved too much for it, though, with the stock speed CPU hitting 100°C before the end of our stress test and starting to throttle. It was happy outside of a full-load test, but pushing all 16 cores to their limits for extended periods was beyond the limits of this slim heatsink with its limited number of fins.

A single 120mm fan and slim heatsink isn’t going to cut it against monster CPUs such as the Core i9-12900K, where the Thermaltake Toughair 310 got too toasty in our full-load stress test.

However, as our additional test proved, it was more than able to cool the Core i5-12600K with room to spare for a modest overclock, plus it boasts excellent build quality and a reasonably quiet fan. As long as you’re not cooling a high-end CPU with loads of cores at high clock speeds, this is a decent cooler for a reasonable price.

A great air cooler for mid-range CPUs, but it struggles with high-end models.